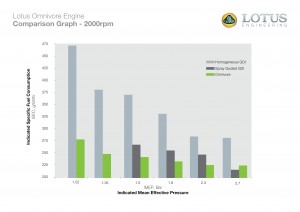 The first testing phase of Lotus Engineering’s Omnivore variable compression ratio, flex-fuel direct injection two-stroke engine has been successfully completed on gasoline. In addition to exceptional fuel consumption results, the engine has successfully demonstrated homogenous charge compression ignition (HCCI) – where the engine operates without the need for the spark plug to ignite the fuel and air mixture in the cylinder – down to extremely light loads. Traditionally, this has been challenging but this combustion process results in ultra low emissions and has been achieved over a wide range of engine operating conditions, even from cold start.

The detailed research has so far focused on lower speed and load conditions that represent a major proportion of an engine’s operation in a real world environment. At 2000rpm and up to approximately 2.7 bar IMEP (Indicated Mean Effective Pressure), the ISFC (Indicated Specific Fuel Consumption) achieved is approximately 10% better than current spray-guided direct injection, spark ignition engines. Emissions results are an impressive 20 ppm NOx at less than 2.3 bar load and has four-stroke-equivalent hydrocarbons and carbon monoxide emissions.

Simon Wood, Technical Director of Lotus Engineering said: “These impressive results represent an important step-forward in Lotus Engineering’s strategy of developing an array of more efficient multi-fuel combustion systems. Omnivore lays the foundations for a novel and pragmatic vision of a variable compression ratio engine concept suitable for production. A multi-cylinder version is practical for a wide variety of vehicles and offers greatest benefit to C and D class passenger cars which can take advantage of the low cost architecture and significantly improved fuel economy and emissions. We are continuing our discussions with other manufacturers and eagerly anticipate the development of multi-cylinder demonstrations of this revolutionary engine configuration.”

The Omnivore engine concept achieves wide-range HCCI combustion and low CO2 emissions through the application of a simple wide-range variable compression ratio mechanism, itself facilitated by the adoption of the two-stroke operating cycle. Technologies combined in this package are all synergistic and provide a route to the efficient use of alternative fuels, accelerating the displacement of fossil fuels.

Jamie Turner, Chief Engineer of Powertrain Research at Lotus Engineering said: “The automotive industry, including Lotus Engineering, has quite rightly advocated engine downsizing for four-stroke engines. This is as a result of the dominance of the four-stroke cycle in the automotive world and its generation of throttling losses at part-load, where vehicles run most of the time. The two-stroke cycle, conversely, does not suffer from significant throttling losses and in many ways is a more natural fit for automotive use. With the thermodynamic disadvantages of throttling losses removed, the two-stroke engine is free to be sized according to its improved part-load fuel consumption. Downsizing therefore isn’t vital and, due to the improved light-load efficiency and emissions performance we see with Omnivore, this technology approach and ‘upsizing’ could permit a more efficient engine.”

The initial Omnivore programme has been in collaboration with Queen’s University Belfast and Orbital Corporation Limited Australia, with sponsorship from DEFRA/DECC and DOE NI through the Renewables Materials LINK programme. Future work by Lotus Engineering will concentrate on further investigating the operation on gasoline and alternative renewable fuels such as ethanol and methanol, with more in-depth analysis of specific test points. 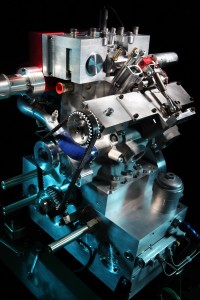 Omnivore Summary
The Omnivore engine concept features an innovative variable compression ratio system and uses a two-stroke operating cycle with direct fuel injection. It is ideally suited to flex-fuel operation with a higher degree of optimisation than is possible with existing four-stroke engines.

The engine concept features a monoblock construction that blends the cylinder head and block together eliminating the need for a cylinder head gasket, improving durability and reducing weight. In this case, the application of a monoblock is facilitated by the absence of the requirement for poppet valves. A novel charge trapping valve in the exhaust port allows asymmetric timing of exhaust flow and continuous variation of the exhaust opening timing.

The variable compression ratio is achieved by the use of a puck at the top of the combustion chamber. This simple, yet effective system moves up and down effecting the change in geometric compression depending on the load demands on the engine.

Monoblock
The monoblock incorporates the cylinder head, the cylinder barrel and the inlet ports, together with mounts for the variable compression ratio system and the charge trapping valve housing. It also contains the non-moving location of one of the two possible injector mounting positions provided for research purposes. The other injector position is in the variable compression ratio puck. The monoblock is mounted on the upper crankcase, which is a common component with all of Lotus’ single-cylinder research engines. The engine carries a full primary and secondary balancer system. The monoblock is water-cooled by an electric water pump.

Computational fluid dynamics is used extensively to ensure effective cooling of the monoblock, a feature assisted by the removal of the cylinder head gasket, inherent in such architecture. The chief advantage of a monoblock construction in any engine, aside from the bill of materials and assembly benefits, is the reduction of bore distortion afforded by the removal of cylinder head bolts. This is especially important in piston-ported 2-stroke engines.

Variable Compression Ratio Mechanism
The primary component of the variable compression ratio mechanism is what is termed the ‘puck’, or a moveable junk piston in the cylinder head. In the case of the research engine, this puck is driven in and out by a double-eccentric mechanism itself comprising proprietary parts. The puck itself does not move at engine speed. In addition to the spark plug, the puck carries one of two possible injector positions. It is water-cooled and carries simple piston (or ‘junk’) rings for primary sealing, and an ‘O’-ring towards the top for final sealing.

The variable compression ratio system is controlled by an electric motor and worm drive arrangement at the front of the engine. Because there are no poppet valves in the engine, it is clear that the puck could be of a large diameter and since there is no need for valve cut-outs in the piston crown, the minimum volume of the combustion chamber can be much smaller than has been the case in variable compression ratio engines shown to date. When the puck is in its innermost position, its surface is essentially coincident with that of the combustion chamber squish band and this yields the highest compression ratio of 40:1.

The combustion chamber geometry necessarily alters as the puck is moved to vary the compression ratio. The chamber geometry in Omnivore was therefore chosen on the basis of 2-stroke experience in spark ignition operation. Consequently, the puck is positioned in the cylinder head in such a way that the non-moving squish band directs cooling flow towards the spark plug. The puck is water-cooled from the main engine cooling circuit.

Charge Trapping Valve
The charge trapping valve is caused to oscillate by a short articulated connecting link from an engine-speed eccentric shaft itself rotated by a belt drive from the crankshaft. A simple charge trapping valve mechanism provides for asymmetric exhaust timing and hence a modification of the original piston-ported two-stroke operating cycle. Fitting an articulated link between the eccentric shaft and the trapping valve actuating arm affords the opportunity independently to vary the opening and/or closing point. In this ‘variable’ form, at light load, the charge trapping valve can be made to control exhaust port opening, to maximize expansion in the cylinder, and the blowdown period can be optimised. The position of the control arm is controlled by the engine management system. All charge trapping valve components and their configuration have been analysed kinematically, and since they operate with modified simple harmonic motion, they do not suffer from jerk stresses.

Other Components
The cranktrain of the engine comprises an 86 mm stroke crankshaft, a trunk piston of 86 mm bore and a connecting rod with 195.5 mm between centres. The piston carries four piston rings: two pegged half-keystone compression rings which traverse the ports in the upper section, and a Napier scraper ring and U-Flex oil control ring in separate grooves in the lower portion. These are not pegged since they do not have to traverse the ports. In this manner, the working chamber is completely sealed from the crankcase and hence wet-sump lubrication can be employed.

Since this is a research engine, it is cooled by an electric water pump with a separate electrically-driven oil pump used for lubrication. Scavenge air is provided externally. For convenience, air for the Orbital air-assist DI system is provided from the factory air supply regulated to 6.5 bar maximum air delivery pressure. Note that in any multi-cylinder application it is envisaged that all these subsystems would be incorporated into the engine in the normal manner.