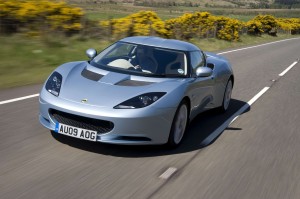 The Lotus Evora was selected by Top Gear magazine and online teams as the best Sports Car of the last 12 months.

The Top Gear Awards, now in their 10th year, searched for the most exciting and innovative sports car of this year. The awards are not only well established, but are also truly global, running across 24 international editions and Top Gear websites in the UK, US and Australia.

Dany Bahar, CEO of Group Lotus plc said, “I am delighted that the Evora has won the Top Gear award for Sports Car of the Year 2009. Top Gear is very well regarded around the world and it is a fantastic achievement for all who have worked on the Evora to win such a prestigious award.”

Dany continued, “I am particularly pleased that the Top Gear team commented on the huge improvements in quality at Lotus, confirming that the Evora is an exciting supercar that can also be used for every day driving.”

This accolade adds to the awards haul for the Evora, which includes:

The iconic British sports car manufacturer opens its doors for an exclusive behind the scenes tour of the site and a virtual drive around the famous Lotus Test Track.

Lotus invited Google to record a testing session of selected Lotus cars and to give fans of the legendary British sports car brand a chance to look around normally hidden areas of the Lotus Headquarters in Hethel, Norfolk. On the Lotus test track, sharp eyed Street View users will spot the Lotus 2-Eleven being driven quickly and enthusiastically (just as it is intended to be!), a research and development Lotus Exige 265E which is fuelled by sustainable, environmentally friendly ethanol and a number of prototypes of the new Lotus Evora.

Nigel Marshall, Head of Facilities Management for Lotus said, “We decided to give Street View users an opportunity to look around part of the Lotus HQ and to virtually drive the Hethel Test Track. Only a select number of drivers have driven the Lotus circuit over the years, but now anyone can get a closer look at where some of the most iconic British sports and racing cars have been tested and developed. To see some dynamic track driving of the Lotus 2-Eleven just check out the North Hairpin!”

Matthew Prestopino, Google’s Head of Street View Operations in Europe said, “Being invited to come and drive alongside some of the UK’s coolest cars was a real treat. This is the first ever circuit in the UK to be photographed for Street View and car fans are going to love taking a virtual tour and locating their favourite Lotus cars in action on the track”.

The Street View of the Lotus Headquarters can be viewed here:

Users can access street-level imagery of the Lotus site by zooming into the lowest level on Google Maps, or by dragging the orange “Pegman” icon on the left-hand side of the map onto a blue highlighted road such as the Lotus test track.