The 2010 GGLC Autocross Series came to a close on October 16th at the expansion parking lot of Great America in Santa Clara.

The event closed what was another banner year of GGLC autocrossing that featured 6 points events, a practice event and two 2-day autocross schools. In all there were nearly 500 drivers who took over 5,000 runs and spent over 4,000 minutes on track (nearly 3 days of driving)! 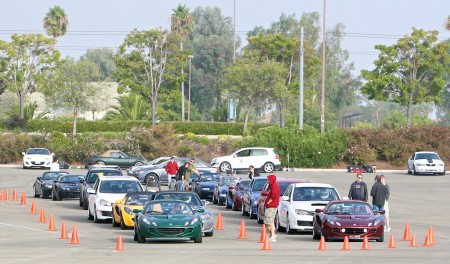 70 drivers arrived and were confronted with a challenging course that twisted through the lot. Weather was “perfect” fall Bay Area, a bit cool in the morning with a very light breeze mid-day with a few clouds around to temper the sun.

Of the entrants 37 Lotus comprised of 21 Elise and 6 Exige, plus it was designated as “Classic Lotus” day. The classic Lotus were represented by 3 Seven/Seven clones, 3 early Elans, an Esprit and 3 Europas, or maybe we should say 2 Europas and a “Europa” in BIG quotes!

Course set-up took a bit longer than usual since we aren’t as familiar with the site and unlike the Marina site there aren’t any 20’ x 20’ squares in the concrete. But, we were up and ready to run by 8:30 and the first car hit the track right at 9 am.

This was a longish course, with a crossover. Coming from the start box was a very quick left-90 and then a slight right bend and a crest that made a blind entry into a sweeping and dipping right-hander. You then sweeped to the left under power into a sweeping 180 right that was followed by a 4 cone slalom. The trick was to stay well to the inside exiting the 180 to set up for the slalom.

It was back through the crossover and bend to the right with a tight exit as there was a bulge on the left. This was followed by a double right hand corners where you took the first as an early apex, then took an early turn in for the second as the tarmac fell away toward a drain in the lot and the car wanted to drift wide of the apex.

A fairly quick left sweep that led up to the far end of the lot and a 90-left followed by a straight and a box slalom. The final leg was another 4 cone slalom where the 3rd cone was off-set causing you to have to slow.

Raw TTOD went to our own Barry S. in the peusdo Europa with a 42.811. Barry just finished re-assembling and installing his engine the evening before after getting some machining done to cure an oil leak that cropped up 2 weekends earlier. 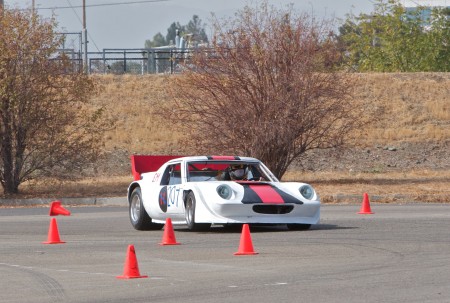 Barry’s “Europa” may looks sort of like a Europa… the only part that’s still pure Europa are the door skins, roof panel and bit of the rear quarters and engine cover. Underneath is a modified Esprit chassis, custom suspension and a turbocharged 3 rotor Mazda 20B engine with Porsche gearbox.

John Z in the Flamer Europa got down to a 52.2 before running into a driveline problem and Tom C got his Toyota powered S2 Europa to a 56.499. 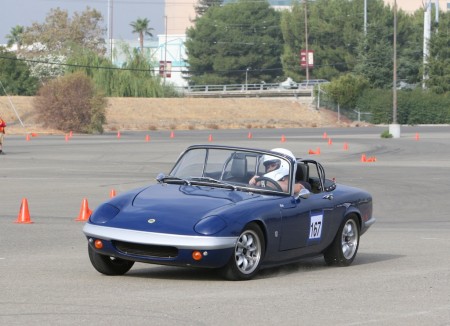 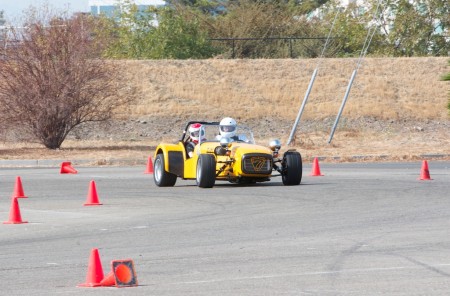 The Seven-clones were speedy and competitive with the quickest being Jim R in his WCM Ultralite getting down to a 47.489, Rahul N also in a WCM Ultralite at 47.511 and then Dave H in a Caterham Superlight at 47.840. Great driving from all three to be within 4 tenths of one another!

And then came the gaggle of Elise and Exige drivers. 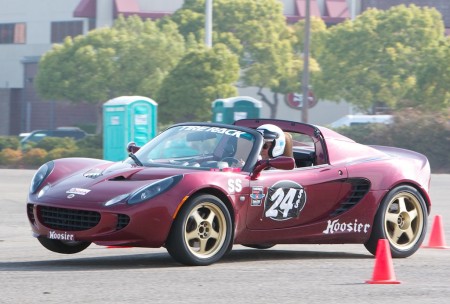 Fast time for this group went to Shelly M at a blazing 45.328, showing everyone why Shelly is the reigning 2010 SCCA SoloII Champion. 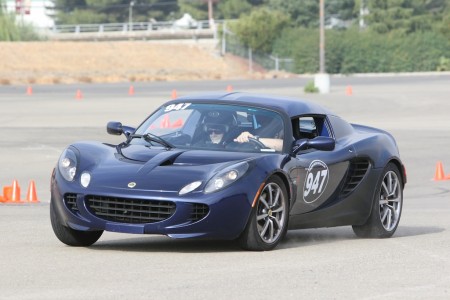 BBQ and Year-end Awards
As has become the tradition at the final event, we arranged for a catered BBQ lunch complete with tables, chairs and tablecloths! BBQ beef and chicken with potato salad and dessert was prepared on site and year end trophies awarded.

In what can only be called an upset the Lotus class Champion went to Shelly M who’s consistent finishes put her a top last year’s champ, Jason S.

We also had a chance to take this fantastic photograph of all the Lotus lined up during the lunch break. Click on the image to see the full resolution version but be warned that it is a very large file (10 MB)

GGLC Autocross 2011
We now get a bit of a breather over the winter. And, within the next couple months the 2011 GGLC Autocross calendar will be announced. It’s likely there will 6 points events with one or two practice events, a autocross school and LOG 31 (Lotus Owners Gathering) in Las Vegas where the GGLC has been asked to host the LOG Autocross. So 2011 will be fun and busy!

Photo Gallery
A huge thanks to Dave Ellis for taking these wonderful pictures and making them available to the club.