While we have shown you the new 2011 Elise and its fuel economy before, EVO just posted this video of their road test of the new 1.6L Elise variant for the UK. Enjoy! 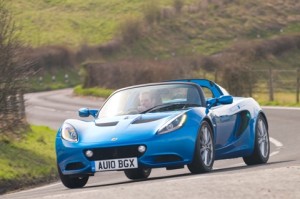 We are delighted to announce that the new 2011 Lotus Elise has just been certified with an outstandingly low emissions figure of 149g of CO2 / km which represents a reduction of 16% over the previous Lotus Elise S.

This means that the Elise has the lowest CO2 for its performance level for any gasoline sportscar in the world.

Not only does this low emissions figure give a greener drive with less guilt but it also relates directly to fuel consumption with the new Elise turning in an impressive figure of 56.1 mpg (5.04 litres per 100 km) extra urban. This means that the Lotus Elise could travel a colossal 500 miles (800 km) on one tank of fuel – the equivalent of Paris to Marseille or London to Aberdeen.*

Fed up with the figures yet? Stay with us, there’s more.

These world leading emissions and economy figures are a direct result of Lotus commitment to its core values of performance through light weight and efficiency. The Elise weighs just 876 kg and to put this weight into perspective, a nameless convertible sportscar from Stuttgart (Germany) weighs in at 1335 kg.

Aerodynamics have been improved by 4% and a new super efficient, 1.6 litre 4 cylinder VVT-I engine has been installed which is 200 cc smaller than the engine in the outgoing Lotus Elise S and produces the same power. And the performance figures speak for themselves: 0-60 mp/h in 6.0 seconds and 0-100 km/h in 6.5 seconds!

Are you ready to celebrate with us?