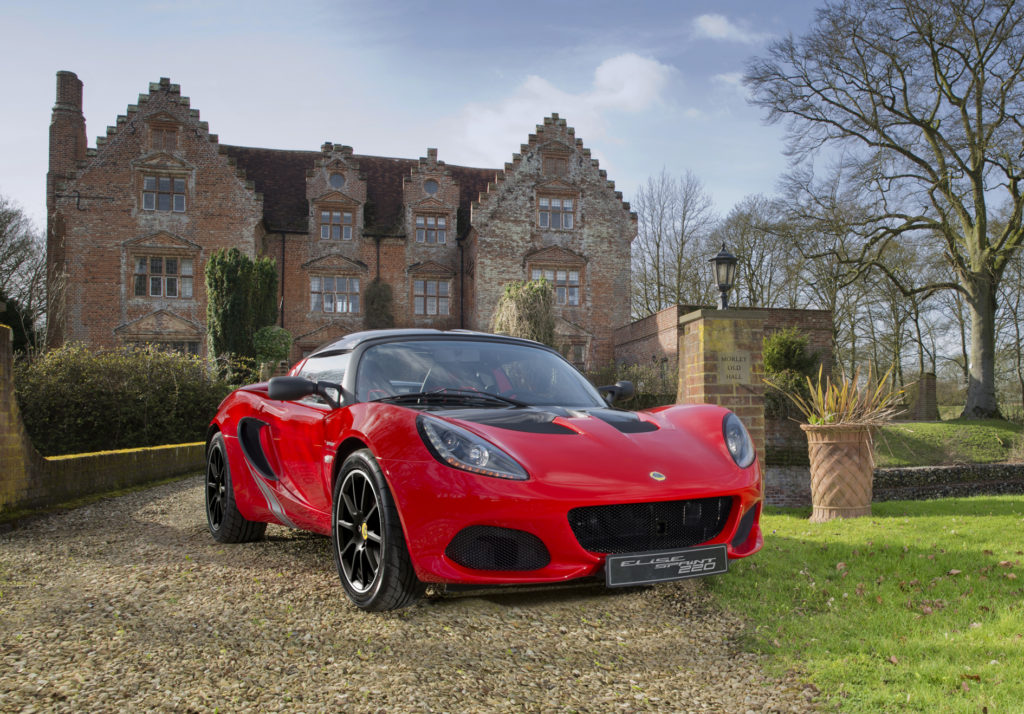 Evolved, energised and even lighter, a significant update for the legendary Lotus Elise has been unveiled ahead of its arrival in showrooms this spring.

Pride of place in the latest Elise line-up is the new Sprint edition, capturing the spirit of Lotus by offering the latest in efficient engineering to deliver a car that sets the standard at under 800 kg. Featuring a host of weight-saving items as standard, as well as the Elise’s distinctive new styling, the new Lotus remains true to the company’s founding principles. Benefitting the range as a whole, all new Elise editions receive the car’s new look and new interior options, and every single one of the Sprint’s lightweight components can be specified on the standard Elise Sport and the Elise Sport 220 variants. 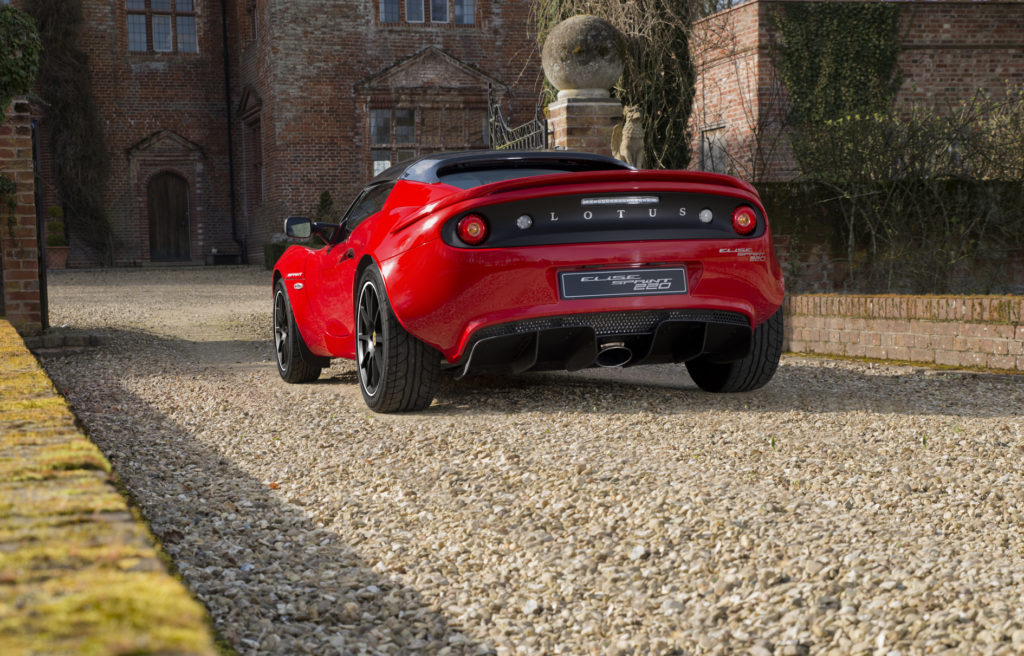 In the biggest weight cut to the car since the introduction of the first-generation Elise, Lotus has returned to its roots by employing the same intense engineering strategy as used on its most recent models. The Sprint edition of the Lotus Elise has removed 41 kg from the previous model, to reach a benchmark dry weight of just 798 kg. 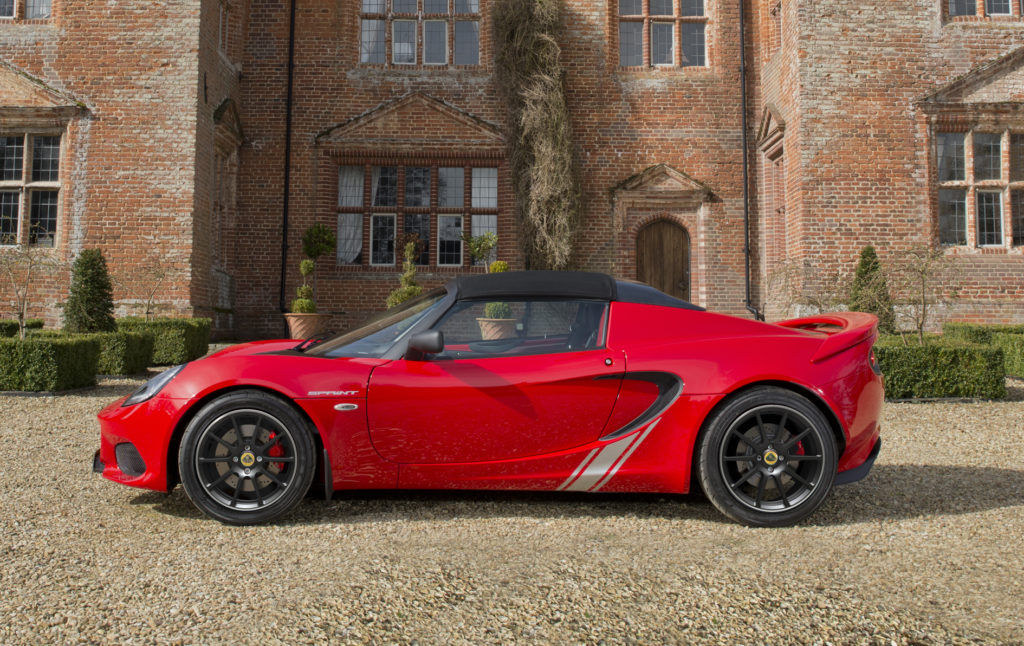 Focusing on driver involvement, to provide an immersive experience, the new Elise reaffirms the company’s leading position in automotive engineering. A benchmark in purity and balance, the Elise is a favourite amongst drivers and enthusiasts, and to date nearly 33,000 examples have been hand built at Lotus’ famous Hethel factory. Distilled from the very essence of the company’s heritage, the Elise carries Lotus founder Colin Chapman’s vision of efficient engineering into the future and arrives as the company continues its return to form with its strongest ever line-up of vehicles. 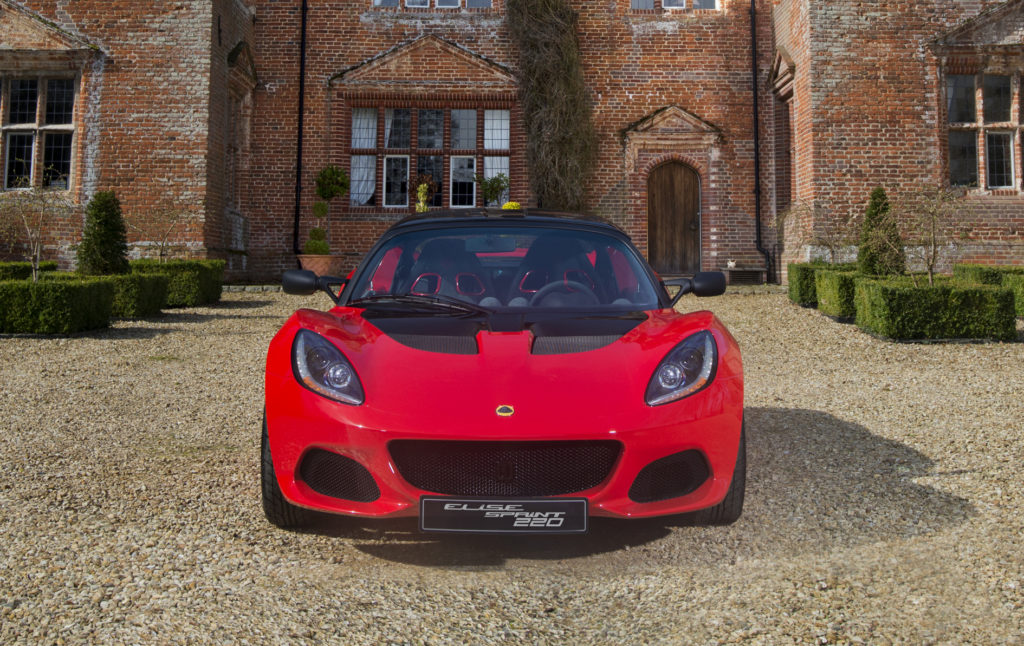 Integrating a new front and rear aesthetic with Lotus’ established design language, this latest Elise also receives a wide range of cabin enhancements – including the lightweight open-gate gear select mechanism first introduced on the Lotus Exige Sport 350. The Sprint is available in both the 1.6-litre naturally aspirated and 1.8-litre supercharged versions. Delivering an exciting mid-point in the range, it broadens the car’s appeal by including lightweight and carbon components as standard.

Speaking of the new car Jean-Marc Gales, CEO, Group Lotus plc. said, “Once again, the Elise continues to redefine what is possible in terms of adding lightness to a sports car. Whilst other manufacturers try to keep pace with Lotus’ weight reduction achievements, we’ve raised the bar beyond their reach. An agile, lightweight sports car does not weigh just over a tonne. It should weigh substantially less and, it is a fantastic achievement from Lotus in ensuring that the fully type approved new Elise now dips below the 800 kg barrier.”

The Sprint and the spirit of Lotus

Ensuring that this latest Elise remains true to the company’s DNA, the return for the Sprint badge – as used on historic models including the Elan – is designed to provide a highly attractive super-lightweight option sitting above the respective Elise Sport models, and below the top of the range Elise Cup 250.

The Sprint’s standard lightweight components include a Lithium-Ion battery, saving 9 kg, Lotus’ beautifully detailed carbon race seats, 6 kg, new lightweight forged alloy wheels, 5 kg, while the carbon access panel, roll hoop cover and engine cover, and polycarbonate rear screen save 6 kg. Collectively they cut an impressive 26 kg, compared to the previous Sport and Sport 220 models, and together with the improvements made to the whole Elise range bring the weight of the new Elise Sprint down to just 798 kg (dry). This includes new, optional two-piece brake discs, saving 4 kg, which will be available from May this year and optional carbon sill covers (-0.8 kg). This reduction in weight translates into quicker acceleration (with 0-60 mph in 5.9 seconds and 4.1 seconds for the Elise Sprint and Elise Sprint 220 respectively), harder cornering and a power to weight ratio of up to 168 hp / tonne (Elise Sprint) and 257 hp / tonne (Elise Sprint 220). 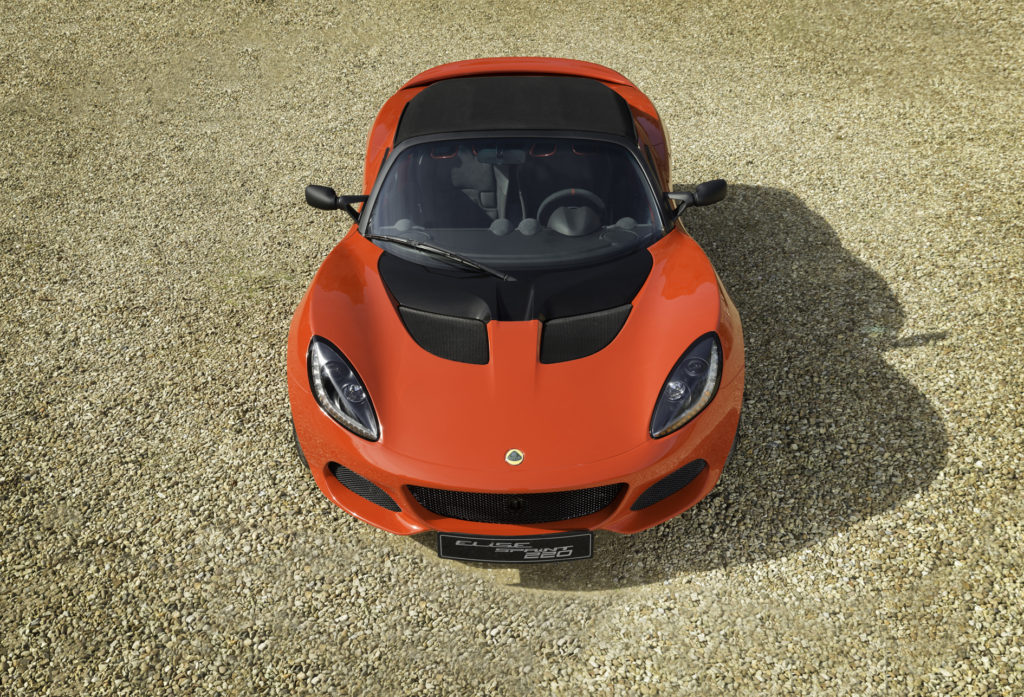 Unlike some manufacturers, Lotus understands the importance of engine note, and Hethel’s acoustic engineers have spent time altering the aural appeal of the more powerful Elise Sport 220 and Elise Sprint 220 models. Providing the perfect soundtrack at any speed, the new exhaust makes the 1.8-litre supercharged Elise the best-sounding 4-cylinder car on the market.

External design touches for the Sprint range include a matt black transom panel, black wheels which come with custom contrasting metal spun rims, distinctive yet subtle side stripes on the bodywork and unique side and rear badging.

Other highlights comprise bodywork keyed colour inserts for the sports seats, transmission console and HVAC surround, along with Sprint badge stitching. The Sprint’s detailing continues inside with an array of optional Alcantara® trim panels on the doors, sills, seats and vents surrounds, all with contrasting stitching.

As well as a new Elise Sprint edition, the whole of the new Elise line-up benefits from a range of improvements, which includes a 10 kg mass reduction thanks to a number of new components. Changes to the body including a redesigned lightweight front clam panel, with wider radiator apertures and mesh pattern grille provide a more aggressive aspect and 8.7 kg less weight. The new design of rear transom panel now has two rear light clusters, rather than four, with reversing and fog lights now mounted inboard so reducing weight by 0.3 kg and visually enhancing the rear design.

Modifications front and back are more than skin deep and have allowed the careful balancing of aerodynamic downforce across the whole car. Rubber elements mounted on the flat underside and ahead of the front wheel, together with an additional diffuser vane at the rear, help modify airflow under the car reducing drag and increasing stability.

In addition to injecting some visual drama into the new Elise’s cabin, Lotus’ beautifully detailed open-gate manual gearbox also provides a much more positive and direct operation – giving more precise and quicker shifting. Both technically and aesthetically appealing, thanks to the exposed open-gate design, it further reduces weight with a net saving of 1 kg. An evolution of the design first used on the Exige Sport 350, but specifically optimised for the Elise, it perfectly matches the Lotus’ personality. 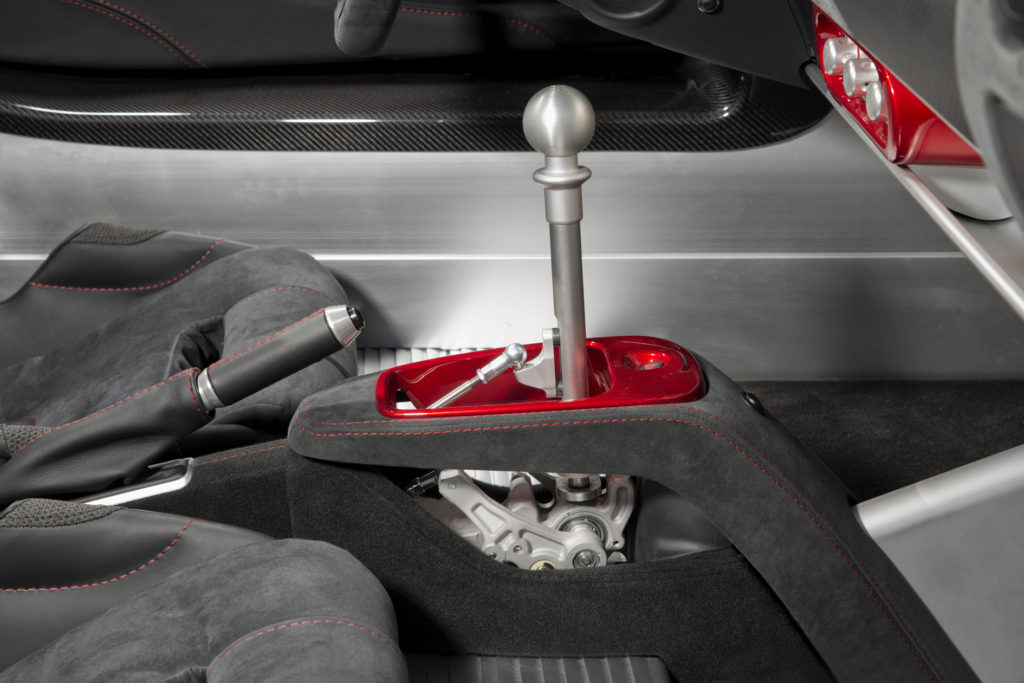 The cabin also benefits from a new centre console, as seen on the Exige and optional carbon sill covers which reduce weight by 0.8 kg and increase the door aperture by up to 10 mm, aiding ingress and egress. The Elise’s instrument panel has also received attention, with new graphics making it easier to read and a new in-car entertainment system, including iPod® connectivity and Bluetooth® functionality, can also be selected when ordering. 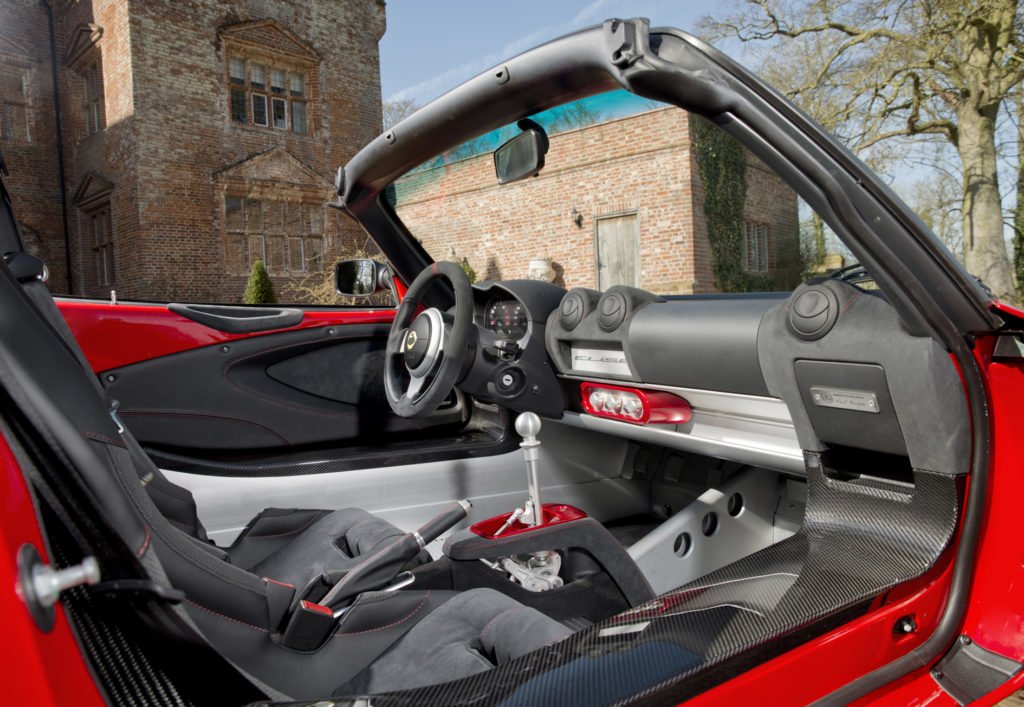 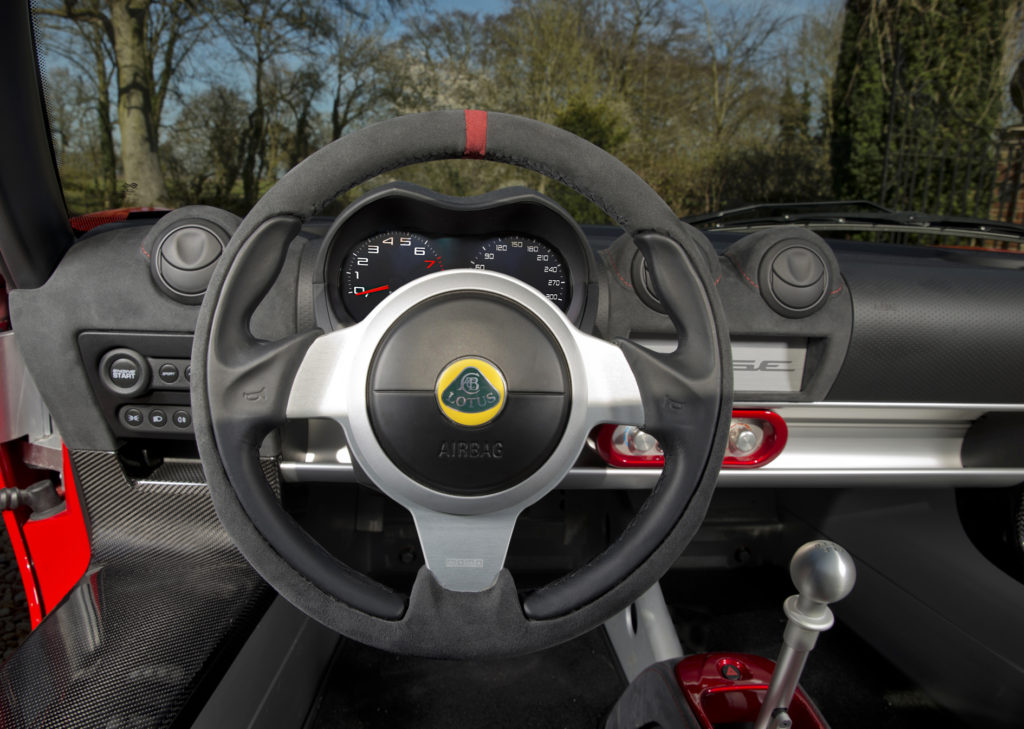 The new Elise Sport and Sprint are available in two engine options: the 1.6-litre or the supercharged 1.8-litre. Offering 134 hp / 160 Nm of torque and 217 hp / 250 Nm of torque respectively, they have been specifically tuned to suit the Elise and both help to deliver a benchmark power-to-weight ratio and class leading efficiency. Being so lightweight, emissions are extremely low with 149 g / km CO2 and 173 g / km CO2 for the 1.6 engine and 1.8 engines respectively. 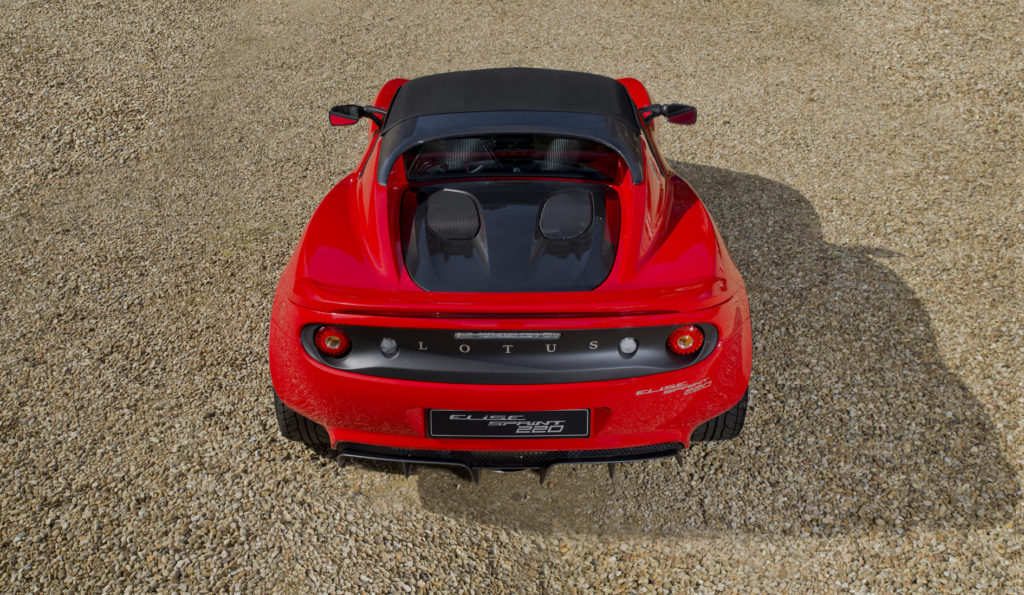 Retaining the elements that have always kept the Elise ahead of rivals, the car is built around an extruded and bonded aluminium chassis which is both tremendously strong and torsionally stiff – weighing just 68 kg.

The new Elise also carries over the same suspension setup as before, with fully independent double wishbone suspension and a front anti-roll bar, coupled with Bilstein high-performance gas dampers and Eibach coaxial coil springs front and rear. Being lighter than the preceding model, the effective spring rate is marginally increased, retaining the compliant ride for which all Lotus cars are legendary.

Designed to continue the legacy of the Elise as Lotus’ most popular model ever, the new range car can be ordered today with deliveries starting from April 2017. 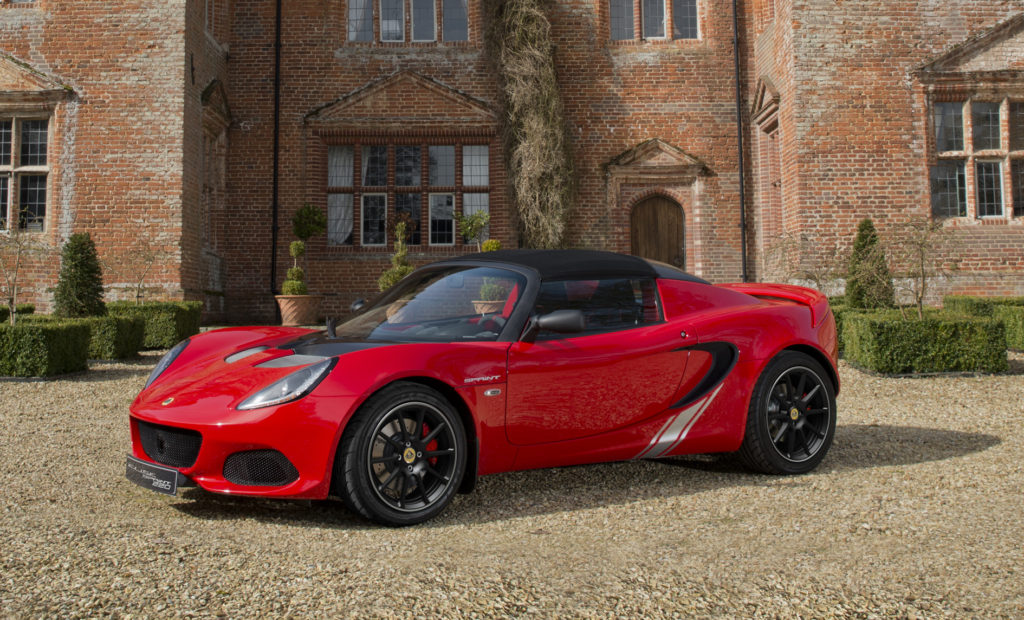 Every new Lotus Elise customer can personalise their vehicle through the Lotus Exclusive program. Developed by the Lotus Design team, it combines traditional British craftsmanship with the best of modern design. Conceived to inspire customers, allowing them to tailor vehicles to their personal taste, it offers a comprehensive array of options and provides an alluring alternative to an off-the-peg sports car.

To find out more about Lotus Elise range visit: http://www.lotuscars.com/about-elise