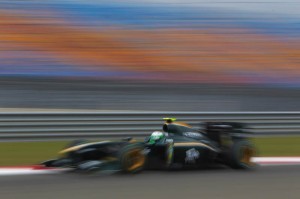 Lotus Racing put in another solid performance in qualifying for the Turkish Grand Prix, with Jarno Trulli finishing the session 19th and team mate Heikki Kovalainen 20th. Jarno ran the whole session on the harder prime tyres while Heikki started on the options, but opted to change to the prime after seeing Jarno recording faster lap times, a decision that paid off with both drivers finishing ahead of their closest competition, and edging ever closer to the teams ahead. 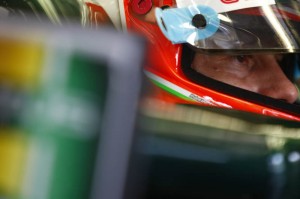 Jarno Trulli (Lotus Cosworth T127-03) Qualified 19th, 13 laps, 1.30.237 / FP3 19 laps, best time 1.30.618: “I’m pretty pleased even though it was a bit of a difficult day. I had a minor problem this morning which meant I couldn’t really use all the time available to focus on setting up the car, so I just got in and got on with it. In quali I used both sets of hard tyres and it felt like the track was quite slippery, particularly in the braking zones, so I changed my driving style a bit and think I did quite a good job to be best of the new teams. I think we are catching up with the guys ahead, even though we are still a bit off. But we will have another big step when we go to Silverstone, and we’re also now working hard on next year’s car, so we’re definitely going in the right direction.” 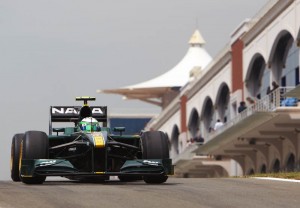 Heikki Kovalainen (Lotus Cosworth T127-01) Qualified 20th, 11 laps, 1.30.519 / FP3 22 laps, best time 1.30.884: “It was good out there today. On our first run we went with the soft tyre which was probably the wrong choice as it wasn’t working quite as well as yesterday, but the second run on the primes was good. The car felt particularly stable around the high speed corners and the balance felt great so I’m happy. Jarno did a better time today, but I’m pushing hard – I’m always pushing to the limit and am looking forward to the race tomorrow. I feel confident, and hope we can close the gap again to the other guys ahead.”

Mike Gascoyne, Chief Technical Officer: “I’m pleased with our performance in qualifying this afternoon. There was a question mark from this morning whether to run the prime or option tyres – we felt the car was more stable on the primes and that decision paid dividends with us being only 3.2seconds away from the Red Bulls who used the same tyres in Q1- that shows just how much progress we’ve made as a team from the start of the season, and that’s very satisfying. So – a good solid performance today and we’ll look forward to the race tomorrow where we want to get both our cars to the finish line.”

Tony Fernandes, Team Principal: “All in all today’s been another good day and it proves to me that our future is very bright. To be honest I was starting to dream about Q2, and while we may still be a little bit off that we’re clearly getting closer and closer, and thinking back to where we started, that’s incredible. We need to work on giving Jarno more confidence in the car, and perhaps today we could have got more from Heikki’s tyres, but I think there’s still more to come from the 2010 car – maybe even another 0.5 seconds. Tomorrow will be all about getting two cars home, and I know our team has the experience and strength to do that.

“Today we were just 3.2 seconds off the pace of the Red Bulls in Q1 and if you cast your mind back 10 short weeks to Bahrain you can see just how far we’ve come. There we were over five seconds away from the outright Q1 pace and anyone in the sport will tell you what an achievement it is to find nearly two seconds in just seven races. We were also just 2.4 seconds off Ferrari, celebrating their 800th race in Turkey, which is pretty spectacular for a team who are only seven races old – I think that shows to all those who expressed doubts about our participation that they were wrong. We’re also now in a position to turn our attention to the 2011 car, but we’re still here and fighting hard for this season – I want, in the nicest possible way, to take this fight to my mentors Frank Williams and Patrick Head and their team, from whom I’ve learnt an awful lot over the last few years, and compete with them and the likes of Toro Rosso and Sauber, and today’s yet another example of how we really can dream of doing just that. I’m now off to order a kebab for Jarno and Heikki. Well, maybe a kebab pizza for Jarno, and a reindeer kebab for Heikki, if anyone in Istanbul can find them one…..”

Onto Turkey for round seven of the 2010 FIA Formula One™ Championship and Lotus Racing are looking forward to another step forward at the Istanbul Park Circuit. A new rear wing and a number of new aero and mechanical parts should help the team keep moving closer to the midfield, and both drivers are looking forward to the challenges of the 5.338km track. 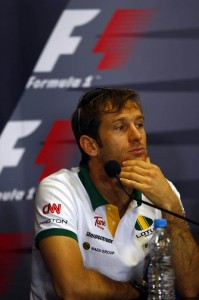 Jarno Trulli (Lotus Cosworth T127-03): ‘The track in Turkey is good – turn eight is challenging but the rest of it is relatively simple, and definitely not as tricky as Monaco! I’m looking forward to getting out on track and having some better luck this weekend. My confidence in the car is growing all the time so I hope a bit of luck and the updates we’ve put on here will help me have a better race this weekend.’

Heikki Kovalainen (Lotus Cosworth T127-01): “It’s good to be back in Turkey, the weather is usually nice here and it seems the same this weekend. Turkey itself is really cool – Istanbul is a huge city with some great places to go. The harbour area is nice and it’s good to try and take some time and have a look around there in the evening – I’m staying on the Asian side this weekend, so I’m not sure I’ll get much time off, but it’s still good to be here.

“The track is great – it’s a big circuit and we get back to a normal open race course after Monaco. We’re fully prepared and I’m looking forward to practice tomorrow to see what the new wing gives us, and where we are after seeing such good pace in the car in Monaco.”

Dieter Gass, Sporting Director: “Looking back on the year so far I think we can be extremely satisfied with what we have achieved. We’ve completed all the targets we set out at the beginning of the season, and from the first time we started testing we have been reliable, which is a testament to the hard work put in by everyone in the team, and our partners. But now we are working on making the car quicker and improving the gap to the established teams – we are getting there, and this weekend, and at Silverstone, we’re looking to take more steps forward.

“Turkey is a track the drivers like as it presents a good challenge – some high and low speed corners, and the famous triple apex corner eight all test the balance of the car, and the aero performance. It’s always a challenge for the engineers and the drivers to set up the car so it’s going to be an interesting weekend here – we have very experienced people throughout the team, so I’m confident we’ll put on a good show. I wouldn’t say Istanbul Park either suits, or doesn’t suit our car, and I think we’ll be pretty much where we were in Barcelona, but with we are looking to take another step forward with the next batch of updates on the car. 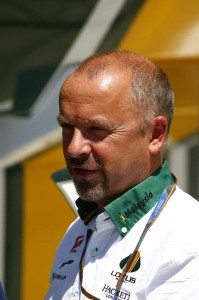 Mike Gascoyne, Chief Technical Director: “Looking back on Spain and Monaco we’ve taken a good step forward in those races and here in Turkey we’re looking to keep on improving and racing the cars in front, not those behind. We’ll be using our new pillar mounted rear wing here, and have some new parts which will enable us to optimise the weight distribution, so again, I’m quietly confident we’ll bridge the gap to those in front that little bit more.”

Lotus Racing has also confirmed it will be running the T127 at the Classic Team Lotus Festival at Snetterton on 20th June.