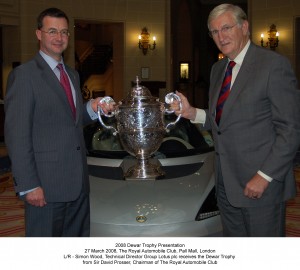 The Royal Automobile Club has named Group Lotus plc as the recipients of the historic Dewar Trophy for 2008.  The Dewar Trophy is awarded for an outstanding British technical achievement in the automotive field and the Dewar Trophy Technical Sub-Committee unanimously agreed that Lotus should be recognised for the company’s development of its Versatile Vehicle Architecture (VVA) chassis technology.

Lotus Versatile Vehicle Architecture (VVA) has been developed to exploit the benefits of producing at low to medium volumes but for niche markets.  Engineering a bespoke low-volume platform is an expensive, time-consuming solution, whilst sharing a mainstream chassis normally results in compromises in performance and design.  VVA exploits Lotus Engineering’s expertise in aluminium, steel and composite body engineering, joining techniques, and vehicle systems integration. This innovative technology offers a fast-to-market, cost-effective approach without the compromise that stems from conventional ‘platform sharing’. 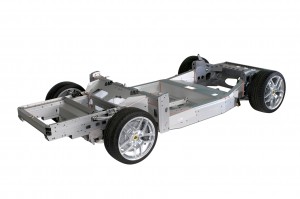 John Wood, Chairman of the Royal Automobile Club’s Dewar Trophy Technical Sub-Committee, said: “The thing that particularly impressed the judges was the single minded determination with which the team at Lotus had sought to find the best possible solution to the particular problem of building an uncompromised lightweight chassis for a low volume road car, and then continually developed and refined that concept to respond to emerging requirements.

“What they have now is a platform system that is not only ideal for high performance sports cars, but also almost infinitely versatile and well suited to the needs of niche vehicle manufacturing in an era where environmental concerns are driving a demand for lightweight structures for a multitude of applications.” 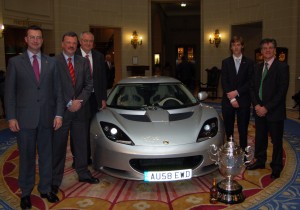 Mike Kimberley, Chief Executive Officer of Group Lotus plc said: “I would like to thank the Dewar Trophy Technical Sub-Committee for the award, and all at Lotus are most honoured to receive this accolade. It is a fantastic achievement for Lotus to win such a prestigious and recognised award for our Versatile Vehicle Architecture technology which is used in our stunning new Lotus Evora sportscar. This award is for everyone at Lotus; those who created the VVA technology, those who delivered the Evora engineering programme and those who are building our car. With incredible hard work and dedication at Lotus, using this technology our excellent staff have delivered the Lotus Evora in 27 months from a clean sheet to the first production car driving off the line, a great achievement.

Mike Kimberley continued. “The automotive industry is changing fast, and technology needs to be robust, faster to market and more cost and mass effective than ever before, and Lotus will be there at the forefront of this exciting period for the future of personal transport.”

The Dewar Trophy Technical Sub-Committee was set up to study automotive engineering excellence and determines if the candidates meet the strict terms of reference for the awarding of the Trophy in a particular year.

In total eighteen entries were considered in detail by the Dewar Trophy Technical Sub-Committee for 2008, representing a complete cross section of automotive development, covering all types of vehicles, components, engineering and systems and, throughout, technical innovation and development was evident in abundance. 2008 marks the 40th occasion the Dewar Trophy has been awarded since the first presentation to Dennis Brothers Limited in 1906.

Steven Hunker, a Lotus enthusiast from Beaverton, Oregon was recently in the UK and got to go on a tour of the Classic Team Lotus workshops. He’s been kind enough to share some of the images he took on the trip with us.
That is the Type 79…Circa 1978
1st – World Driver’s Championship – Mario Andretti
1st – World Manufacturer’s Championship (seventh title for Lotus)

These are the ORIGINAL drawings for absolutely every Lotus ever produced. That drawer contains drawings for cars Type 29 to Type 38!

The original drawings for the Type 27 done by Colin Chapman himself! (see his initial ACBC)

You can read Steve’ full account and see more photos on his LotusTalk thread. If you’d like to visit the factory and/or Classic Team Lotus yourself please contact Richard Parramint (richard@positivespeech.co.uk).

The Times lined up a Lotus Elise SC against an Extra 300 airplane in a drag race. Click through to see who wins.

[The Times via Lotus Enthusiast]

The Golden Gate Lotus Club (GGLC) and Hooked on Driving (HOD) have a special day set up for GGLC & Lotus drivers that want to get started or would like to more experience on track.

Novice and Newbie Lotus/GGLC drivers will be a part of the “A” group and a coach will be with you to help you through the day.

More advance GGLC/Lotus drivers are welcome, but can run in the more advanced HOD groups – B, C or D.

HOD has offered GGLC/Lotus drivers a special $50 discount. Click here to register for the event. See this thread for more details and discussion about this event. Tune into ESPN at 5pm PST today to watch Truth in 24 in High Definition. It is the story of the 2008 24 Hours of Le Mans as seen from the eyes of the Audi team. The movie was made by the wizards at NFL Films and as you can see from the image above it is a must-see for all racing fans.

Update: Garage 419 has a great behind the scenes look into the making of the documentary Winding Road magazine got to spend some time in the passenger seat of an Evora being driven by Matt Becker of Lotus. While the article is a little short on real driving impressions, it does have some info about things like pricing (starting at $70,000), release date (Q1 2010), performance (0-60 in 4.9s), interior, etc… Click through to read the full article.

The World Motor Sport Council met in Paris on 17 March 2009 and decided that the 2009 Formula 1 Drivers World Championship will be awarded to the driver with the maximum wins irrespective of the points. In the case of a tie the points accrued over the year will be used as the tie breakers. Positions 2 onwards will be decided by points only.

The following is the official press release:

A number of measures were agreed to help reduce costs and increase interest in the FIA Formula One World Championship.

The WMSC accepted the proposal from Formula One Management to award the drivers’ championship to the driver who has won the most races during the season. If two or more drivers finish the season with the same number of wins, the title will be awarded to the driver with the most points, the allocation of points being based on the current 10, 8, 6 etc. system.

The rest of the standings, from second to last place, will be decided by the current points system. There is no provision to award medals for first, second or third place. The Constructors’ Championship is unaffected.

The WMSC rejected the alternative proposal from the Formula One Teams’ Association to change the points awarded to drivers finishing in first, second and third place to 12, 9 and 7 points respectively.

Teams will be allowed to carry out three one day young driver training tests between the end of the last event of the Championship and 31 December of the same year. Drivers are eligible only if they have not competed in more than two F1 World Championship Events in the preceding 24 months or tested a Formula One car on more than four days in the same 24 month period.

Teams can also conduct eight one day aerodynamic tests carried out on FIA approved straight line or constant radius sites between 1 January 2009 and the end of the last Event of the 2009 Championship.

The FIA will publish the weights of all cars after qualifying at each Event.

For greater clarity for spectators and media, wet tyres have been renamed “intermediate” and extreme-weather tyres renamed “wet”.

On the first day of practice all drivers must be available for autograph signing in their designated team space in the pit lane.

All drivers eliminated in qualifying must make themselves available for media interviews immediately after the end of each session.

Any driver retiring before the end of the race must make himself available for media interviews after his return to the paddock.

All drivers who finish the race outside the top three must make themselves available immediately after the end of the race for media interviews.

During the race every team must make at least one senior spokesperson available for interviews by officially accredited TV crews.

A number of further amendments were adopted for the 2009 Technical Regulations. Full details will be available shortly on www.fia.com.

As an alternative to running under the existing rules, which are to remain stable until 2012, all teams will have the option to compete with cars built and operated within a stringent cost cap.

The cost cap is £30m (currently approximately €33 or $42m). This figure will cover all expenditure of any kind. Anything subsidised or supplied free will be deemed to have cost its full commercial value and rigorous auditing procedures will apply.

To enable these cars to compete with those from teams which are not subject to cost constraints, the cost-capped cars will be allowed greater technical freedom.

The principal technical freedoms allowed are as follows:

1. A more aerodynamically efficient (but standard) under body.
2. Movable wings.
3. An engine which is not subject to a rev limit or a development freeze.

The FIA has the right to adjust elements of these freedoms to ensure that the cost-capped cars have neither an advantage nor a disadvantage when compared to cars running to the existing rules.

The Honda Racing F1 Team requested to change its name to the Brawn GP Formula One Team. The WMSC accepted this request on the basis that the team is, in effect, a new entry in the FIA Formula One World Championship.

The contract the team had with the FIA was to run as ‘Honda’, which they are no longer in a position to do. However, the standard fee required for a new entry has been waived. 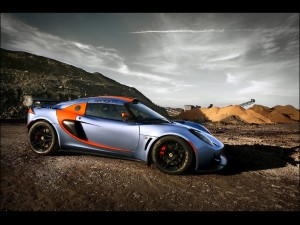 Serious Wheels is running a great article on the Sector 111 Exige with some fantastic free wallpapers featuring photography by Daniel Song. Apart from creating a great looking car, Sector 111 is also a sponsor of the Golden Gate Lotus Club and is a great place to get quality aftermarket parts for your Elise/Exige.

Click through to get the images in a variety of different sizes.

Youngman Lotus, a joint venture between Youngman Auto and Lotus Engineering, has started expanding its Lotus-brand sales network to cover China’s first-tier and second-tier markets by setting up 100 4S stores nationwide by the end of this year. The network will initially focus on the Europestar Lotus RCR (Jingsu) and Persona (Jingyue) models. The ventures manufacturing bases in Guizhou, Shandong and Hangzhou all will be starting mass production this year, with a combined capacity of 450,000 vehicles.