Jean, are you excited about the news that Kimi Raikkonen is returning to F1 next year with Lotus Renault GP?

It’s fantastic news. Kimi has more natural speed than just about anyone who has ever raced a Grand Prix car, and if he’s coming back it’s because he wants to do it, he misses F1, and he believes he can do well. He has had a short break, which was a little bit forced by Ferrari. I think he was fed up with the system and wanted to take time out, which I can totally understand. But now he’s coming back, with Lotus, so it’s really exciting.

Kimi’s speed was never in question, but there were concerns he failed to develop the car as Michael Schumacher had done before him. Is that a concern for you now?

Michael was brilliant at that, but it isn’t working for him now at Mercedes and I think this is a reflection of how F1 has developed in recent years and re-prioritized. Now you just need to focus on having a quick driver, someone who does the job. The great thing with Kimi is he extracts the maximum from a quick car. When the car was good at McLaren and Ferrari he was always winning. LRGP will expect him to extract the maximum from the Lotus as well.

It’s sure to fire up the workforce at Enstone, isn’t it, having a world champion in the car?

F1 teams need a driver who will consistently set lap times that are 100 percent on the edge. That is what a driver of Kimi’s caliber can do, to dance on the edge and never fall off. From that, the engineers get a baseline. They understand the true speed of their car and can make changes accordingly. It eradicates any doubt. I expect Kimi will be a very valuable tool indeed. But I don’t expect a lot of talking outside the car! I’m sure he hasn’t changed a bit.

Let’s talk about the Sao Paulo race. Bruno Senna was given a drive-thru penalty after he came together with Michael Schumacher. Did you think that was unfair?

Definitely, yes. It was a 50/50 accident, so why penalize one of them? Both cars were compromised – Bruno with a broken front wing and Michael with a rear puncture. To then penalize one of the drivers in this situation kills the spirit of racing. The stewards should have let it go.

Vitaly Petrov started the year on a high with his podium in Australia and finished the season tenth in the Drivers’ World Championship. How well do you think he did?

He’s been very competitive when the car is quick, and it’s been more difficult for him in the second half of the season. He did a fantastic first grand prix but he seems to suffer more when the car is not perfect.

Lotus Renault GP started the year on the podium but struggled towards the end. Did the designers take a few wrong turns?

The R31 was extremely aggressive in terms of design. At the start of the season, Red Bull’s designer Adrian Newey said that the most creative car out there was the Lotus Renault GP. When the best designer in the world says that, it means a lot, and at the start of the year LRGP were brilliant. Then the exhaust-blowing rules changed, and that hurt the team a lot. We were penalized more heavily than any other team. To finish fifth in the championship is superb.

How did you rate the F1 World Championship 2011 generally?

Even though Red Bull Racing was dominant throughout, I thought it was a very interesting season and I enjoyed the races very much. Out of those 19 races, only three or four were a bit boring; I was on the edge of my seat for the rest. We’ve seen lots of overtaking, lots of incidents, and there was tough competition out there, particularly between McLaren and Ferrari. Lotus Renault GP were very competitive at the start of the season as well, so overall I really enjoyed it.

Which race stood out for you?

My shoes are still drying after the Canadian Grand Prix, so that was memorable not least for the incredible race we saw. I could have done without the two-hour red flag delay in the middle, but that race was really exciting and it’s always great to see a change of the lead on the last lap.

Sebastian Vettel was the class of the field, but who would you nominate as your Man Of The Year?

Apart from Vettel, who did an unbelievable job, the award should go to Jenson Button. I was not surprised by his performance, because he’s been a world champion, but the way he managed to be there all the time, even when he was struggling with set-up, and still get good points was impressive. He also pulled some great overtaking moves, so he was aggressive when he needed to be and smooth when he needed to be, adapting to the Pirelli tyres quicker than most. What a mature performance, and all the more impressive when your team-mate is Lewis Hamilton and Jenson is still, essentially, the new boy. I believe 2011 was even more impressive than his championship-winning year, given that he didn’t have the best car and his team-mate was Hamilton

The Los Angeles Auto Show has become a significant event for auto makers and equals in importance with the Detroit show in January. For Lotus the show has become a fixture along side Paris and Frankfurt for the company to launch new cars and make major announcements. In 2010 Lotus used Paris and Los Angeles to introduce the new up market strategy along with 5 new cars. So, it was that the GGLC headed to the Press Days at the 2011 Los Angeles Auto Show. 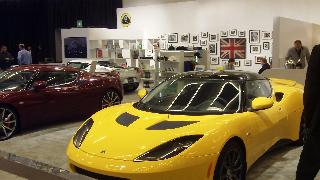 The Lotus booth was modest in comparison to their 2010 presence. Most apparent was the focus on the present versus the future focused 2010 booth. The 4 cars in the booth represented cars currently being sold, the Evora, Evora S and Evora (S) with IPS (Lotus nominclature for automatic transmission). 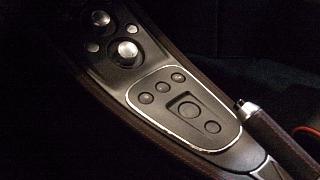 In the booth was a lounge area, refreshment/information bar, meeting area and display of Lotus merchandise. I had an opportunity to meet and speak with Antonio Marsocci, Head of Retail with Lotus Cars Ltd. Antonio is oversees the design, creation, sales and distribution of the Lotus merchandise that was launched about a year ago on www. lotusoriginals.com

Antonio has bold plans for the Lotus merchandise. He was at LA to speak with some of the 40 US Lotus dealers about the distribution and sales of the Lotus merchandise in the US. The US it turns out is a large market for Lotus gear with over 25% of worldwide sales! The US plans are to immediately have US dealers sell Lotus Originals. There are plans for opening Lotus boutiques in key markets like China and Abu Dhabi. 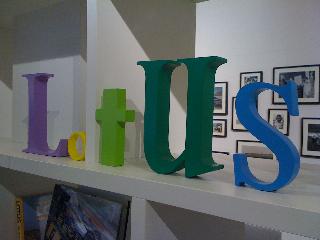 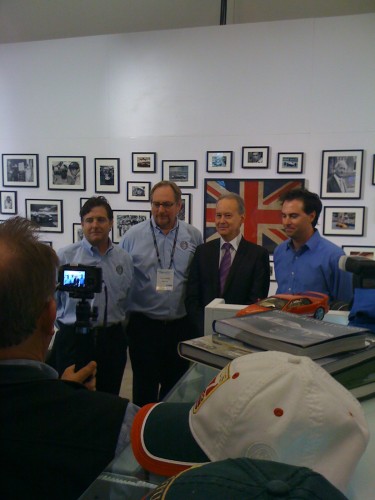