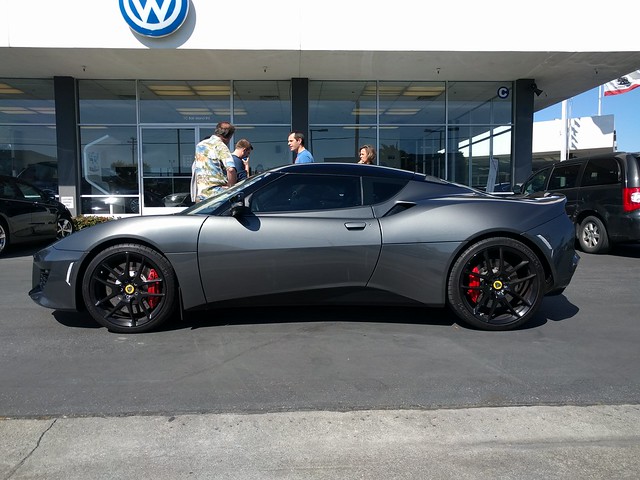 Last week Tom Sutton from Boardwalk Lotus invited the GGLC to swing by and take a look at the new Evora 400 which will be begining US deliveries later this summer. This particular car was one of two euro-spec demo cars that have been going all over the US to attend the auto show circuit and had 21000 kms on it. I got the chance to drive it for a few miles and wanted to write up my thoughts on the car. These are all my personal opinions and will be coloured by my experiences from owning an Elise for 10 years and an Evora S IPS for ~8 months. 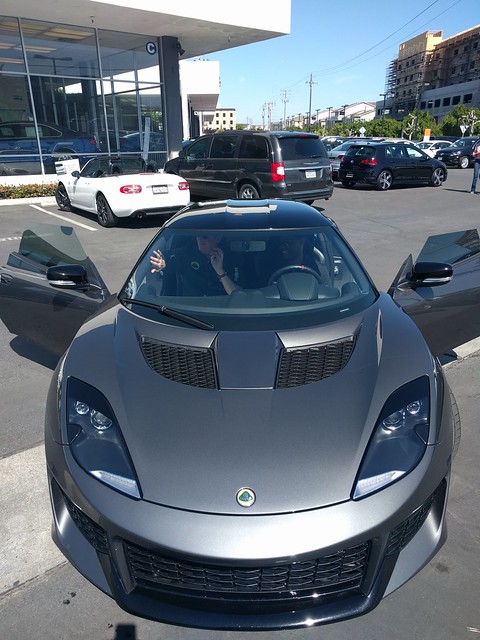 When the Evora 400 was first announced I have to say that I was not a big fan of the looks. The sharp lines on the new front and rear looked a little “boy racer” to me and pushed me into getting an Evora S instead of waiting for the 400. However seeing the car in the flesh I have to say that the new front end looks much better in person and works really well in this carbon grey colour. The black line above the splitter kind of merges into the body and removes the thing I found most annoying about the front. The plastic grill replacing the mesh looks quite good as well. 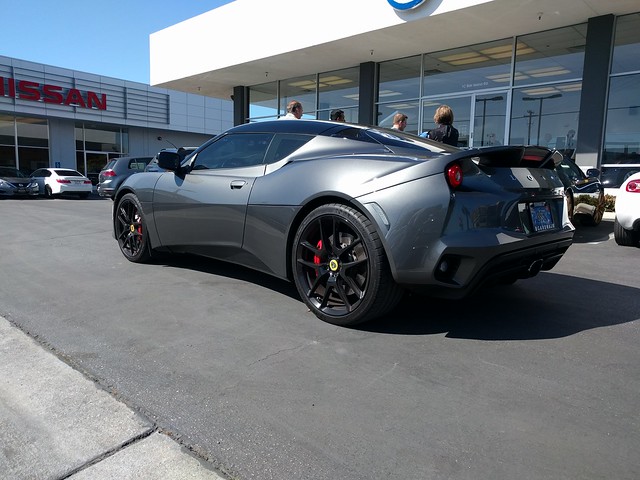 The rear also looks much better in person and I’d have to say that the Evora 400 looks very modern and contemporary. 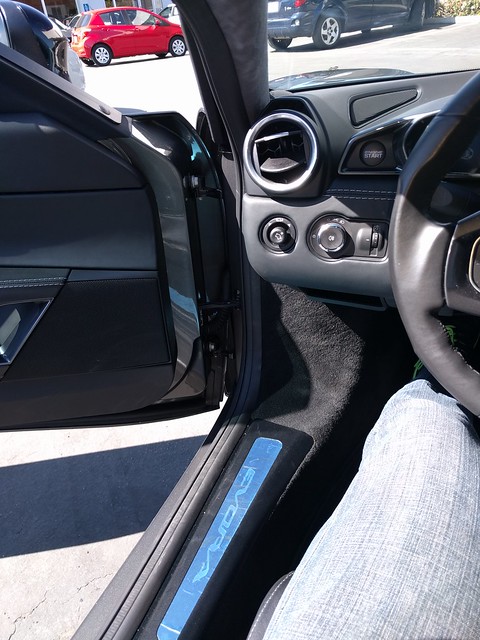 This is perhaps the single greatest improvement of the 400 over the first gen Evora. The side sills are a lot lower and narrower than those of the Evora S (below) which means it is as easy to get in and out of as a regular sports car – no lotus position needed. Additionally the speaker enclosure in the door has been made smaller and thinner which means your feet don’t hit the door every time you get out (even with size 14 shoes). This has been my biggest annoyance with the Evora as a daily driver as you have be even more careful with your feet getting out that you have to in the Elise. 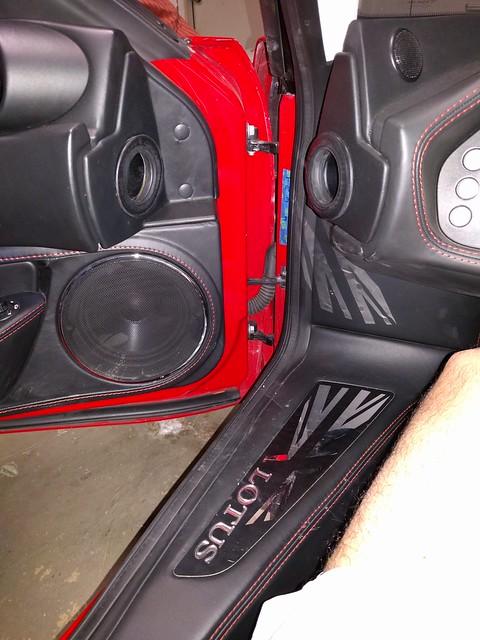 Interior
The first thing you notice about the interior is the extra legroom in the drivers seat. The narrow sill appears to have continued towards the wheel well to give your left leg more room. The manual cars now finally have a dead pedal where you can rest your foot and if feels like there is more footroom in general which came in handy for my size 14 feet. That said my Evora S is an IPS so its hard for me to compare against the manual 400. It also felt like my right knee had some more room though the console didnt appear to be much narrower. 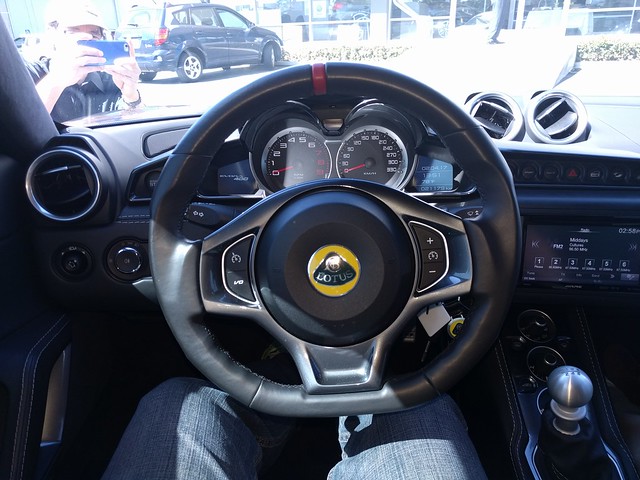 The next thing you notice is the easy access and visibility of all the switchgear. You no longer have to cock your head and look behind the steering to squint at the controls. Plus they are now black with white lettering which makes them significantly easier to read than the old chrome buttons. The digital parts of the dash are now white on black and people who have been driving the car for extended periods tell me that they are easier to read that the red displays on gen 1. The steering wheel material has changed and feels more “rubbery” than my S – this is one change I would love to make to my car if possible. The side mirror controls have been moved to the dash for easy access while the trunk and fuel buttons have been moved to the door. Extra points for the trunk button no longer requiring the impossible combination of key in ignition, car in park, ebrake on, full moon night, fifth wednesday of the month, etc… to work 🙂 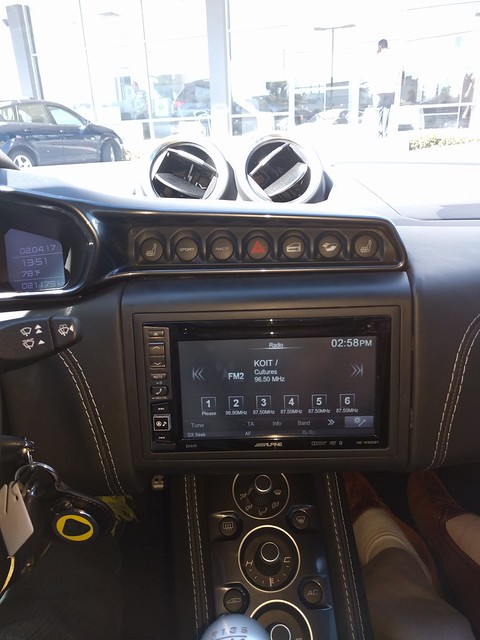 The other thing I really liked was the HVAC controls are easier to turn and have many more detents instead of the current half dozen or so. The stereo is also different but I did not get a chance to play around with it. The glove box is now manual instead of electric which aligns with simplify and add lightness. 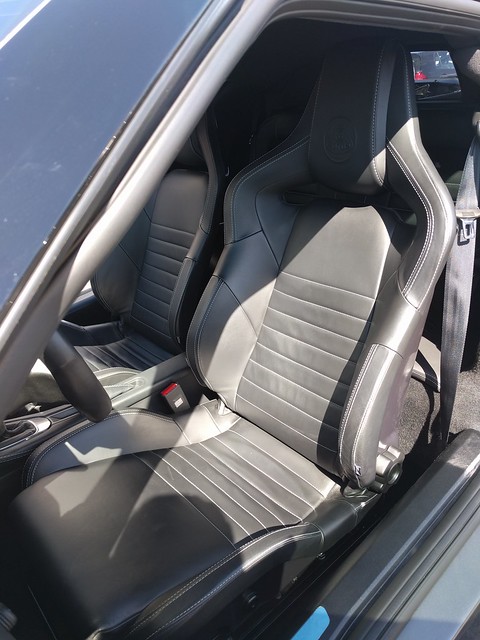 The seats have switched from Recaro to Sparco and now have side airbag included. The stitching is a little different but they are just as comfortable as the original car. They now have a little leather pull to flip the seats forward which is much easier to reach and IMHO looks a lot cooler. The rear seats are as vestigial as ever. 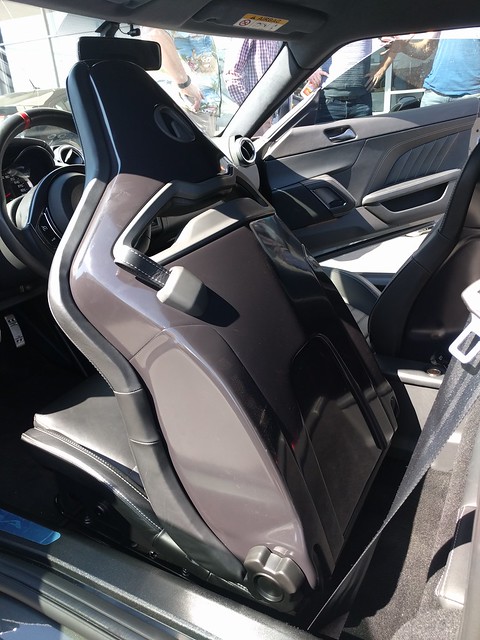 Driving impressions
I only got to drive the car for a few miles in traffic but the ride and handling felt the same as the S. It felt fast but with the lmited opportunities to accelerate it did not feel that much faster than my S. The thing I really liked about the drive was the exhaust which is sportier (louder with better tone) and has a button that controls the noise level independent of the ECU mode. This means you can drive the car in sport mode with the quiet exhaust or be in regular mode with the loud exhaust – the S ties the louder exhaust to the sport mode only which can get a little annoying in city driving. The shifter is also really smooth and felt a better than the other Evoras I have driven and miles ahead of the Elise.

The other thing I liked is that the Evora 400 is better built than the Elise and does not have all the rattles and squeaks you have come to expect from a Lotus. The demo car had over 13k miles on it and felt like a quality item just like my S does after 2 years and ~15k miles. 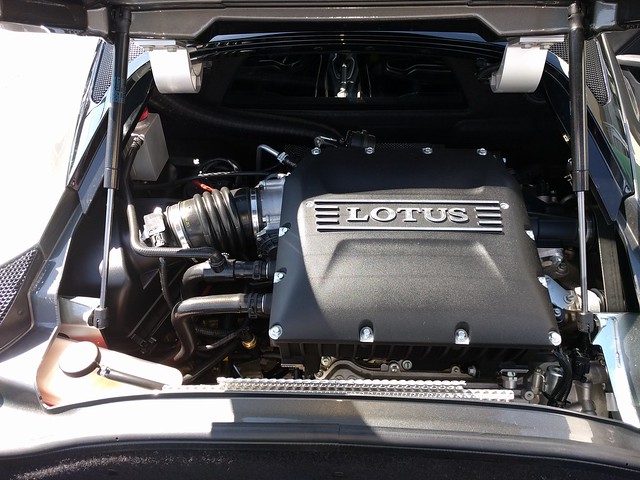 Final Thoughts
My biggest takeaway about the Evora 400 is that it is a much more useable car than the S. It retains the excellent driving dynamics of the original car and adds a nice boost in power while making it easier to live with on a day to day basis. People considering a Porsche 911 as a daily driver should really have a look at the Evora 400 – it is now a competitor in terms of usability as well as performance. For me personally while it is a lot more car I can’t justify the premium over my existing S. That said the upcoming 400 convertible might make me change my mind 😉