It will be 5 years since the GGLC hosted a UK Lotus Tour. Our tour leader was none other than Richard Parramint. Richards long association with the Lotus factory, the Chapman family and numerous Lotus collectors, enthusiasts and racing teams made for bucket list touring of historic Lotus sites, Factory tours and more.

Which got us and Richard to thinking, why not a virtual tour of Classic Team Lotus! While there’s no substitute for physically seeing, touching, smelling and “feeling” the history ooze from the cars of CTL’s collection of historic Lotus F1 and Racers, we thought there would be interest in asking Richard to present a live virtual tour of CTL.

Our FIRST ever LIVE GGLC Virtual Tour will be of Classic Team Lotus featuring Richard Parramint on Saturday, January 23, 2021 at 10:00am Pacific time (18:00 in Hethel).

To join the tour you will need the Zoom meeting app on your phone or PC and to register on MotorsportReg.com – msreg.com/GGLC-CTL-Tour. There’s no cost, but we are caping attendance to 90 attendees.

While this virtual tour isn’t a substitute for an in person tour (CTL in-person tours happen once per month at £45 per person) it may serve as a teaser and entice you to add a trip to Norwich and Hethel to your bucket list (believe me it IS well worth a trip to the UK and at least 2 days in Norwich!).

So, save the date, download Zoom (if you’ve not done so), sign-up on Motorsportreg.com and then log-in on the morning of Jan 23rd! 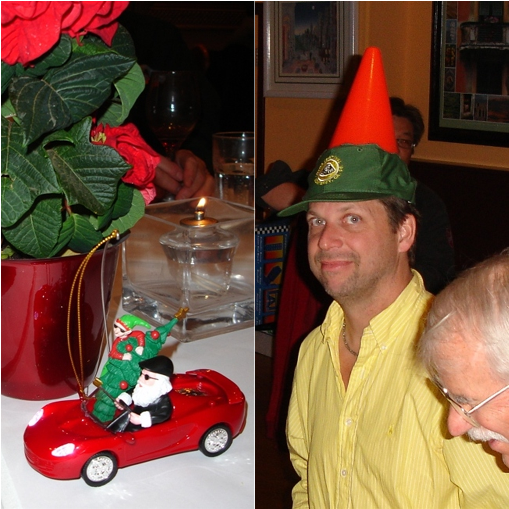 Sign up and reserve your place at the gala GGLC Holiday Celebration at the Four Points Sheraton in Emeryville. Don’t miss out on the wine, food, door prizes and the annual GGLC White Elephant Gift Exchange.

Our gala dinner at the Four Points Sheraton Hotel will be catered with a dilectable gourmet fare.

Our Buffet Dinner will follow at 7:00pm with salads, entrees (chicken, beef & veggie selections) and dessert.

Following dinner we’ll introduce the 2019 President and officers and present awards to the GGLC’s 2018 Autocross champions. Plus there will be door prizes and of course the infamous GGLC Gift Exchange.

PARKING: The Four Points Sheraton has a large parking lot.

Sign up and reserve your place at the gala GGLC Holiday Celebration at the Faz Restaurant in Pleasanton. Don’t miss out on the wine, food, door prizes and the annual GGLC White Elephant Gift Exchange.

The Faz Restaurant in Pleasanton is connected to the Four Points Sheraton Hotel. Faz features many Mediterranean favorites.

Our Buffet Dinner will follow at 7:00pm with a Mediterranean flavor with salads, entrees and dessert.

Following dinner we’ll introduce the 2018 President and officers and present awards to the GGLC’s 2017 Autocross champions. Plus there will be door prizes and of course the infamous GGLC Gift Exchange.

PARKING: The Four Points Sheraton has a large parking lot. We can park as a group on the north side (closest to I580)

The Golden Gate Lotus Club and Dietsch Werks present the San Jose State University’s Formula SAE Team as they unveil their newly built 2012 race car at the GGLC April members meeting. Join us in the back parking lot of Club Auto Sport for a night of socializing, dyno-ing and hanging with racing enthusiasts.

In an effort to raise funds for their program, the FSAE Team has agreed to slave over a hot grill of cheeseburgers, hamburgers and sausages. also on the menu is salad, chips, veggies, beverages and cookies. $5 minimum donation per plate gets you a full meal, a tax deduction and gets the SAE Team the funds they need to get to their competition! DW, GGLC and FSAE will be selling t-shirts, cappuccinos and popcorn. 100% of the money made on t-shirts, food and services goes directly to the FSAE program.

Departure: 10:00am, run will have a short winery stop in the Livermore area.

BBQ: 1pm in Danville (at Mel & Darlene’s) with Mel’s tri-tips, mushrooms and more!

RSVP required for the BBQ. To RSVP email partner”at”gglotus.org

Non-members are welcome to join in. Just be prepared to be recruited to join 🙂

Dietsch Werks is hosting a special GGLC meeting and social at Club Auto Sport in San Jose. This event is open to all members well as folks interested in becoming members in future and includes dinner as well as special entertainment.

RSVP is not required but would be appreciated. For more information including directions please check out the flyers below. 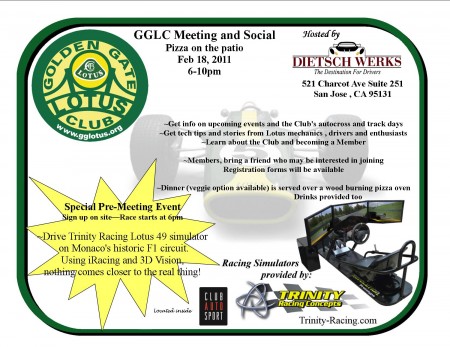 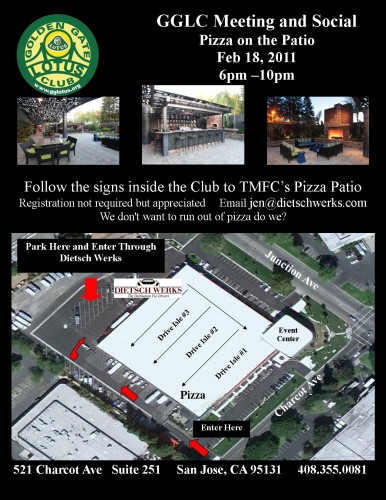 We all know how difficult it is to get to the East Bay for a club meeting on a Friday night, so for June the club meeting will be Saturday, June 19, in Danville with the extra added attractions of Mel’s fabulous BBQ and an optional fun run to Danville from Santana Row. The fun run will start around 10 AM, and the BBQ will begin around 1 PM (and who knows when the meeting will begin!). A contribution of a salad or dessert for the BBQ would be nice, but is not required. RSVP for the BBQ is required. Email for RSVP, address, questions, etc…

January’s meeting at Tom and Cherie Carney’s home has been a tradition in the GG Lotus Club as long as most of us can recall. It is one that many of us anticipate all year long. This year’s event was long on tradition and one big surprise.

It was easy to find the Carneys’ address on Palm Drive in Burlingame. Drivers could see it from three blocks away because it was still lit with Christmas decorations that served as a beacon to the festivities. The ornament-bangled, major-fire-hazard that stood in the front window was, yet, another element of the charm and tradition that we have come to love and expect.

Then there’s the food. Cherie, a splendid cook, has catered professionally, and again this year she offered a astounding array of delicious treats including ribs, shrimp, dips, cheeses, deli-meats, breads, salad, a mountain of seven-layer dip and brownies for dessert. Seriously, there was an insane amount of food available for the grazing guests, and no one left hungry!

For entertainment there was drag racing in Tom’s (new, mega) garage that now features an hydraulic hoist. Throughout the evening, there were at least a dozen spirited discussions at any given time ranging from tall tales and dirty jokes to useful, technical help. Meanwhile, many of the ladies gathered in the kitchen to commiserate.

The meeting was led by our newly elected officers Rob Deitsch (and First Lady Jennifer) and VP Dave Ellis. Another successful (traditional) Toy Rally was reported, and a drama-free, Laguna Seca track day took place under clear skies and a relatively dry track on December 26th.

There was talk of the new Evora, the LA Auto Show and the 2009 West Coast Lotus Meet. The event this year will be especially significant in that LCU wishes to launch their latest model to the West Coast at our event. It will likely take place in September. Details for time and location will be made shortly. Now, there’s a good reason to block-out your calendar!

Rob and Jen offered to host the February meeting at their home, which would be extremely exciting and a GGLC-first if Jen’s pregnancy came to fruition a tad early. The GGLC is soon to expand it membership by one (note: since then, Brandon/Susan stepped up to host the meeting).

As the meeting came to a close, an announcement was made as Cherie and long-time member Betty Nester colluded to spring a surprise, Beehive birthday cake on an aging member who reached sixty years on January 15th.

Traditions are especially great when they include such excellent friends!