The Evora pricing has been announced at $73,500 (full details in press release below) and you can check it out in person during the Bay Area dealer tour at:

In preparation for the arrival of the all-new 2010 Evora into the US market during the first quarter of 2010, two Evoras are set to begin a 44 dealer Open House Tour. Following are the Evora’s US market product content, option packages, pricing details and the full Open House Tour schedule.

All-New 2010 Lotus Evora Prepares for Launch
While Evora production for the UK and European markets has been ramping up for months to begin fulfilling their orders, production for the US and Canadian markets has yet to begin. Though the Evora has only been shown on a few occasions thus far in the US and Canada, approximately the first two months of production are already pre-sold. To enable more sports car aficionados an opportunity to see the Evora in person, starting Friday, November 13 two Evoras will embark on a 44 dealer Open House Tour of the US.

The Lotus Evora in Summary
The Lotus Evora will enter the sports car market as the only mid-engine 2+2 in production. Evora is designed for people who desire the exotic sports car characteristics of stunning design, exclusivity, dramatic proportions and performance. However, it offers real-world usability, surprising efficiency and a unique sense of occasion as well.

Powered by a 3.5-liter V-6 producing 276 hp at 6,400 rpm and 258 lb./ft. of torque at 4,700 rpm, the Evora employs innovative lightweight chassis technology to ensure all-around exceptional dynamic performance, in keeping with the great Lotus tradition. From its beginning over 60 years ago, Lotus’ consistent guiding principle has been to achieve ‘performance through lightweight’ and that’s always meant all facets of performance including efficiency. The Evora provides unassailable proof of this ethos as the only regular production car in the world capable of accelerating from 0 – 60 mph in under 5 seconds (4.9), on up to a top speed over 160 mph (162) while also delivering 30+ miles per gallon on the highway.

Inside the Evora simplicity meets sophistication in an exquisite combination of detailing and hand-built craftsmanship. By using only the finest leather from renowned experts Muirhead, the interior is hand-trimmed and twin-stitched to create a beautifully tactile and visually striking environment. Genuine aluminum instrument and center console surfaces contain ergonomically positioned controls providing a purposeful drivers’ cockpit. The leather wrapped steering wheel is tilt and telescopically adjustable, flat-bottomed to ease entry and exit and made from ultra-lightweight magnesium to provide super-precise feel through the wheel. The adjustable Recaro seats cradle the occupants and, along with the perfectly placed aluminum pedals, complete the optimum connection between driver – Evora – and the road. The rear seat area is cleverly hidden within the exotic, mid-engine profile of the Evora. An Alpine audio system with available touch-screen navigation, iPod™ (and other MP3 player) connectivity, Bluetooth and other amenities make the journey all the more pleasant. The Evora is a pure sports car that you can happily, comfortably enjoy every day.

For peace of mind, the 2010 Lotus Evora has a 3-year/36,000-mile limited vehicle warranty with an 8-year chassis perforation warranty. 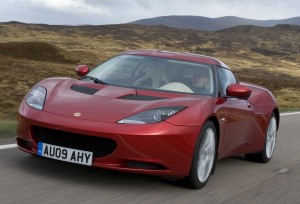 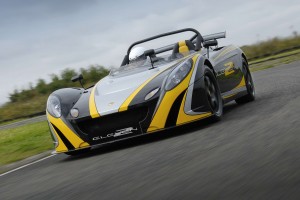 For the ‘EVO Car of the Year 2009’ test EVO Magazine took a fleet of the world’s most desirable driving machines to the sensational roads of the Isle of Skye in Scotland, to evaluate the cars over a three day and 1000 mile test route.

The Lotus Evora, along with cars from manufacturers including Lamborghini, Ferrari, Porsche and Aston Martin were put through their paces on the challenging and technical roads by the EVO team.

In the Car of the Year test, the group of 13 cars were whittled down to the top 5 and then scored out of 100, with the Lotus Evora beating all other entrants with an impressive score of 96.0.

John Barker, Motoring Editor said of the Evora “It’s a magical thing across the ground, deft like an Elise, with exceptional poise and feel. What was telling for me was that, getting into it after any of the other finalists, it was even better than I remembered: a bit smoother, a bit quicker and even sweeter dynamically, too. It’s a beguiling car.”

The ‘EVO Track Car of the Year 2009’ event swapped the dramatic scenery and challenging gradients for the more familiar, but fast and demanding West Circuit at the Bedford Autodrome.

The Lotus 2-Eleven along with eleven other cars competed for the title of ‘EVO Track Car of the Year 2009’. The test group contained some of the most exciting track cars on sale today, including hot hatches, track focused supercars and exotic track machines.

In the Track Car of the Year competition the cars were each timed around the West Circuit and compared subjectively to find a winner. On the way to winning the competition the 2-Eleven posted the second fastest time and closely matched the criteria set by the judges of providing entertainment, being rewarding and a challenge to drive.

Roger Green, Track Test Editor, when commenting on the 2-Eleven said “Every single judge described (the 2-Eleven) as ‘superb’ in their assessment notes.”

Henry Catchpole, Road Test Editor, stated that “It’s fabulous. It takes the habitability, finish and dimensions of the road car and adds the dynamics and awesome gearbox of a race car.”

Luke Bennett, Operations Director of Lotus Cars Limited said that “I am delighted that the Evora took the title of “EVO Car of the Year 2009” and it is made even better that at the same time the 2-Eleven has won the Track Car of the Year competition. The Evora and 2-Eleven offer very different ownership propositions; however both have the same Lotus DNA and each reward the driver with a great Lotus driving experience.”

Luke went on to say “It is a great endorsement for Lotus cars that the most refined car in the product line up is picking up awards at the same time as the most extreme car in the range, illustrating the great wealth of engineering and manufacturing expertise at Lotus.”

No experience is necessary. 1st-time rallyiest are encouraged and will receive extra help.

Bring: one or more friends, pens/penscils, paper, a clipboard and any type of car.