Lotus Originals is the fashion arm of the legendary sports car and racing marque, and the collection is inspired by the British sense of style, heritage, innovation and rebellious spirit that goes into every on-road Lotus design.

Lotus is hailed for its engineering and thirst for competition. It is also known for style. Heroes of reality and fiction, from Jim Clark to James Bond, have outgunned their rivals from behind the wheel of a Lotus, and they looked good doing it. Partner Forza Rossa Holding, official Lotus cars dealer since 2011, recognise this and joins the Lotus family with the opening of the Monte Carlo store which carries the brand new Lotus Originals retail concept. 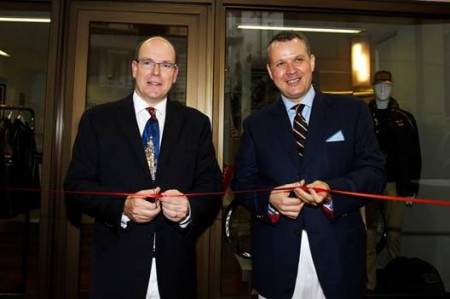 It’s fitting that this first franchise store be in Monaco, the scene of the first grand prix victory for a Lotus, in 1960 at the hands of Stirling Moss. His Serene Highness Prince Albert II, Monaco’s Mayor Georges Marsan and State Minister Michel Roger were joined by Lotus F1 Team’s Gerard Lopez, Eric Boullier and Romain Grosjean, Lotus Sales and Marketing Director Maurizio Parlato and Forza Rossa Holding’s President Ion Bazac at the opening of the store.

Here you will find apparel, accessories, gifts, toys, bikes and collectables that will thrill Lotus fans, and bring others into our Lotus world.

Speaking of which, we took the opportunity in Monaco to launch a special car designed for the next generation of Lotus drivers: a slightly smaller-than-usual Lotus Elan, one of Lotus’ most-beloved classics which this year celebrates its 50th anniversary. What’s more, the car is eligible for racing. The Little Big Le Mans which forms part of the Le Mans Classic race weekend, is designed for lucky young drivers aged 6-14, and this Elan is eligible for this events.

Also, 20 years after we helped win gold at Barcelona in 1992 with the revolutionary Lotus Type 108 Superbike, we are showing for the first time, a stunning hand made carbon fibre black and gold bespoke bicycle from our new collaboration with Condor Cycles Ltd.

Lotus Originals can also be found at the company’s Hethel HQ and at Norwich City Football Club’s stadium, and we’re also opening our flagship store in the heart of London in six weeks time: 4,800 sq ft of retail space on Regents Street. It will be, as it is here in Monaco, an iconic location for an iconic brand.

Maurizio Parlato, Director of Sales & Marketing, Group Lotus: “It is our mission to grow the Lotus brand internationally, to become more of a global player, and to do that we need to produce great cars, but we also want Lotus to be a lifestyle brand of its own. Our founder, Colin Chapman, understood this. He was a trendsetter in every way. He also recognised the marketing potential of motorsport better than anyone else at that time, and had an eye for detail that pervaded every aspect of his company’s presentation. Therefore, I believe he would be very excited to see what we’re doing here today – opening this first Lotus Originals franchise.”

Ion Bazac, Forza Rossa Holding President: “It is a big honour and pleasure for us to inaugurate the first Lotus Originals franchise store in such a prestigious and exclusive place like Monte Carlo, famous worldwide for its fabulous Grand Prix. With the new Lotus originals collections and accessories you will find a unique link between the past, the present and the future of the Lotus brand and its very passionate history and heroes. Lotus Originals Monte Carlo is more than a store, it is a place of meeting and dialogue between fans and their favorite brand, so that the legend, the winning heritage and dreams of Colin Chapman be more alive than ever.”

The third event of the 2012 GGLC Autocross season is now open for registration for club members on MotorsportsReg. Non-members will be able to register one week later.

This season we have 8 classes that you can participate in. Please read over the details on the GGLC Autocross page.

For Lotus Elise/Exige/Evora drivers, please choose your class that you want to participate in and also use the autocross classification tool to calculate your index points. For non-Lotus cars, please use the appropriate SCCA class.