Next stop South Korea. Marking another first in F1™ history, the 2010 Championship now moves to the brand new Yeongam circuit for round 17 of the 2010 FIA Formula One™ World Championship – the Korean Grand Prix. Lotus Racing head to the recently finished track in buoyant mood, having recorded their best ever finish at last weekend’s Japanese Grand Prix when Heikki Kovalainen brought his T127 home 12th, with teammate Jarno Trulli just behind in 13th. Heikki Kovalainen (Chassis T127-03): “I left Suzuka on Monday morning still buzzing after such a great race. I said then that the car was just fantastic to drive, and all drivers pray for days like that – it meant so much to the whole team, and our fans, for us to go one better than we did in Australia. That sort of result gives us a huge boost as the season draws towards the end, particularly because we were so far ahead of both Virgins – while they have kept updating their car at each race, we’ve been working on 2011 and haven’t updated our car since Silverstone, so to stay that far ahead is a major result.

“I’m looking forward to Korea. It’s new for all of us, and while I’ve had a bit of a look at the layout, the first couple of laps will be all about finding the right lines, and then we will focus on setups. To be honest, it won’t take long to get to grips with the track and I think the car will be ok there. It’s a pretty typical modern circuit – a couple of long straights with heavy braking at the end, and then a mix of a few tighter corners and a couple more quicker ones, so we should be about where we were in Japan. If I get another set of tyres like my second set in Suzuka it’ll be great, but whatever happens, we’re closer to tenth in the Championship now, and that’s what it’s all about.” Jarno Trulli (Chassis T127 – 04): “I really enjoyed Japan but it was good to get home! The whole team performed really well over the weekend, and we took a big step towards the end goal of tenth, so everyone left happy.

“Korea looks pretty good – Some drivers use simulators or even games to take a look at the lines, but I usually find my way around a new venue by running a few laps of the track on the Thursday. It’s a good way to work out the stresses of the plane journey, and you get a view of where the braking and turn-in points are. Whatever happens, after a couple of laps I’ll know my way around and where I can push, so it doesn’t take long to acclimatise.” Mike Gascoyne, Chief Technical Officer: “Looking back to Japan, we could not really have had a better weekend. I think both Jarno and Heikki managed to extract every bit of performance they could from the cars, and that showed in our advantage over our nearest rivals in qualifying and in the race. We made a couple of announcements before the race about next year that showed how ambitious we really are, and there are more to come, but for now we go to Korea in a very positive frame of mind.

“It is always a bit of a step into the unknown when you go to a new venue, but we have completed a number of simulation programs at the factory that have given us a pretty good idea of how the car will behave on track. The big unknowns are what downforce levels to run, and how the track surface will stand up to the rigours of a full race weekend. We will find the right setup over the weekend, and any track issues are out of our control – it has been passed by the FIA so we will just go there and do our best. If there are any problems, it will be the same for everyone, so we cannot waste time worrying about what might happen – we will just focus on bringing both cars home in the race and taking another step closer to the end of the season.” Tony Fernandes, Team Principal: “I am still smiling from what happened in Japan. The whole team deserved a result like that, and we were able to capitalise on what was a pretty crazy race by being in the right place at the right time. That was down to having experienced drivers who kept out of trouble on track and drove brilliantly all weekend, a team on the pitwall who made the right calls to give us the chance to grab 12th and 13th, and guys in the garage who put in the hard work to help us stay well ahead of our competition – all in all it was a fantastic team effort.”

Sign up and reserve your place at the gala GGLC Holiday Celebration at Ristorante Don Giovanni in Mt View. Don’t miss out on the wine, food, door prizes and welcome the new president.

GGLC Gift Exchange
Everyone attending is invited to participate in the Annual GGLC White Elephant Gift Exchange. To participate bring a wrapped unwanted “gift” item from your garage to the dinner. Please make sure your gift is non-toxic and clean. Then at the dinner you’ll have the opportunity to exchange it for another “gift”. 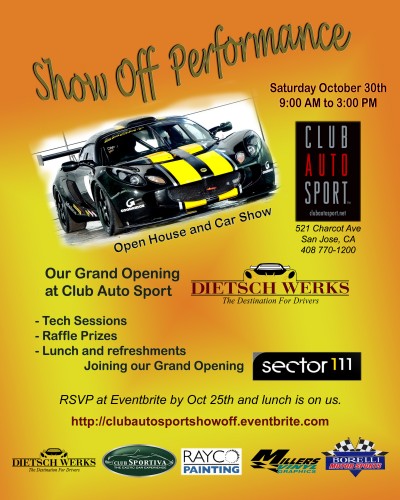