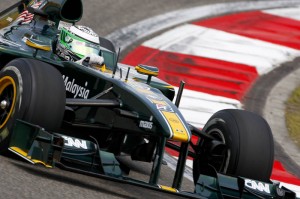 Lotus Racing Team Principal Tony Fernandes was one of the last people to make it out of Europe before most of the airspace was shut down, leaving Paris after being given the prestigious Officier of the Legion d’Honneur award in a ceremony on Wednesday, and arrived in China to see Jarno Trulli qualify 20th on 1.39.399 and Heikki Kovalainen 21st on 1.39.520 after a busy session at the Shanghai International Circuit.

Both Lotus Racing drivers were out early in the session and despite an early spin for Heikki, settled down well, staying best of the new teams until the dying seconds of the session. After a strong showing in all three practice sessions the team looks in good shape for tomorrow’s race and will be looking to put on a good show for the growing numbers of their local Chinese fans, and the fast expanding Lotus Racing army across Asia and around the world. 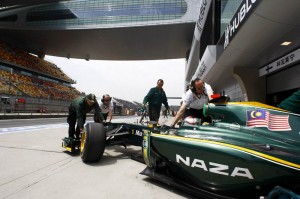 Jarno Trulli (T127-03): “It was a shame because I think I could have gone quicker, but the strong wind played a part and it wasn’t easy out there. It was a very gusty and I struggled a bit with that but having had three good practice sessions I’m expecting a better race tomorrow.”

Heikki Kovalainen (T127-01): “It was ok today but I couldn’t quite get the perfect lap. The first two sectors were ok but just before the back straight I couldn’t quite get the exit right and I think I lost about three tenths there. The wind has played its part today – in some braking zones at the back of the track there’s a tailwind which unbalances the car, but the second to last corner is into a headwind and it felt really good under braking into there but it’s no big deal – it’s just one of those things! The race tomorrow will be better for sure. The car has felt good all weekend on heavy fuel so let’s see what happens then.” 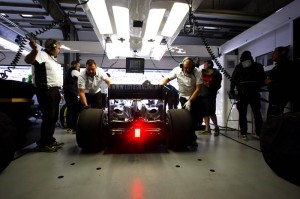 Mike Gascoyne, Chief Technical Officer: “It was the classic mixed bag today. We’ve been strong in practice and if it wasn’t for Heikki’s final sector we would have finished best of the new teams, but sometimes it doesn’t go according to plan. We were satisfied with the setups on both cars and while it’s been a bit disappointing I’m confident the work we put in throughout practice, on long runs with heavy fuel, will pay off for us tomorrow.”

Tony Fernandes, Team Principal: “First of all I’m just really pleased to be here in China! It was a very close shave – I think I was about an hour ahead of the airspace shut down and this is one of the races I’ve been really looking forward to coming to with the team. The spectacular growth of China over recent years is an inspiration to me and the whole Lotus Racing team – it shows how high we should be setting our sights and how we can reach the top by working hard to achieve your dreams. Seeing the fans’ banners for us in the stands makes me very proud, and shows that Lotus Racing has a real significance for Chinese motorsport fans, who know a good thing when they see it!”