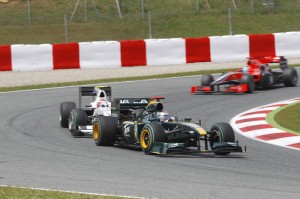 After a very strong showing all weekend, race day in Barcelona saw Lotus Racing continue to move ahead, with Jarno Trulli finishing 17th and first of the new teams, whilst Heikki Kovalainen suffered a gearbox failure on the grid and had to be retired before the race had started. Despite the best efforts of his pit-crew Heikki was unable to join the race, but the team’s mood after the race was good, with Jarno achieving his first full race finish. 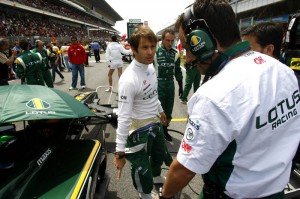 Jarno Trulli (Lotus Cosworth T127-03: 17th, fastest lap 1.29.564): “I’m pleased we finished comfortably ahead of Virgin even though the car felt a bit difficult to drive today. I don’t really know why but it didn’t feel the same as it did on Friday – despite that we achieved what we set out to today, showed good race pace and finished well.” 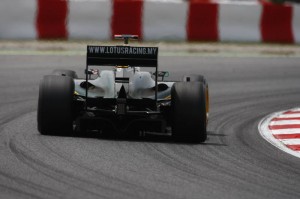 Heikki Kovalainen (Lotus Cosworth T127-01: Retired): “We had a gearbox problem while we were firing up on the grid. The gearbox selected two gears at once – there was some sort of software issue which caused it to fail. It’s unfortunate, because we have had such a good weekend, but these things happen. Next up it’s Monaco, and I know we’ll be stronger again there, so we can focus on the next race and hope the luck returns.” 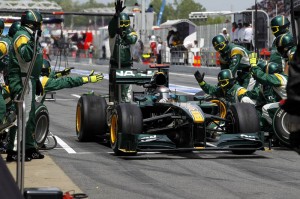 Mike Gascoyne, Chief Technical Officer: “It was a bit of a disappointing afternoon because we had a difficult race where we weren’t really able to show our true pace. We had a gearbox problem on the grid with Heikki, which was caused by a procedural issue, not a reliability problem. That’s frustrating as I think he would have had a strong race. Jarno made a great start, he had some contact going down into the first corner and throughout the race was struggling with the rear of the car. It was difficult for him in traffic, but he did a good job to bring the car home and get his first real race finish. Now we’ll just have to go to Monaco next week and show what we know we can do.”

Tony Fernandes, Team Principal: “It was a good day at the office today – disappointing for Heikki but on the positive side the reliability looks good and we had no hydraulic issues at all. We continue to have at least one car finish ahead of all the other new teams which has always been one of the goals and we learnt a lot again today. It’s a shame Heikki wasn’t there as it makes a big difference when we only have one car on track – both of them can help push us further ahead. We’re all now looking forward to Monte Carlo and Turkey where we’ll have all our upgrades together on both cars and build on the performance we put in during qualifying here.”