Polyphony Digital has announced a new feature in Gran Turismo 5 which will allow you to upload data from an automotive data logger and recreate your laps within GT5. While technology currently requires the use of the CANBUS data along with a Denso GPS controller we can only hope that one day we might be able to use this technology with regular track day dataloggers. In the meantime check out this video of a Lexus IS-F lapping the Fuji circuit with its virtual recreation side-by-side.

We are glad to announce that today is the 1 year anniversary of the Chapman Report Online and we are celebrating it with our 100th blog post. CRO was started on Feb 8th 2009 with a simple charter:

Through this blog we plan to share with you what we’re up to: club events, track days, autocrosses, drives, etc… We also hope to introduce to some of our members doing the things they love the most. Additionally we will keep you up-to-date with all the latest Lotus news, stories, videos and articles.

The last year has been an eventful year for Lotus with the universal acclaim for the Evora, the design of the Omnivore engine, the appointment of Dany Bahar and the return of Lotus to Formula 1. We have also had the retirements of Mike Kimberley and Roger Becker to whom we wish all the best for their future endeavors.

The GGLC has had another successful year with several autocrosses, track days, meetups, meetings, the WCLM, etc… We’ve also had our members win several trophies at the SCCA nationals and the 24 Hours of Lemons.

Chapman Report Online has been around to chronicle this eventful year and share this information with the GGLC members, the Lotus community and the world at large. Our thanks go to the GGLC executives for supporting the the creation of GGLC blog and to all our members and friends that have given us content to post.

As the graph above shows, we have steadily grown in traffic (the final drop-off is because February hasn’t ended yet) both to the website and via RSS. All in all its been a fantastic year and we hope to have many more years like it. In closing, we’d like to leave you with the 5 most popular blog posts over the last year – enjoy!

Thanks to all our GGLC memebers for making it out to the GGLC Sunnyvale lunch today. We had 11 people attend for some excellent food and entertaining Lotus conversations.

The news of Roger Beckers retirement has brought out fond remembrances of his time at Lotus. One of these comes from our very own Barry Spencer who used to work in the Engineering department at Group Lotus. In his own words:

The very first week ( Nov 1980 ) I was in the US, I spent it at the SF auto show with Loose imported cars. That week I meet Miss San Francisco and we dated for two and a half years. The first time I went back to England after moving to the US was in 1982. I took Lisa with me and had an appointment to show her the Lotus factory. Roger gave us the complete tour and then he asked Lisa if she would like to go for a ride in a Lotus. Lisa sat in the front and I was in the back of an Excel. On the test track we go and all I could hear was Lisa screaming. A great ride with an awesome driver.

A big thanks to Barry for sharing this story with us. Rogers influence on Lotus will certainly be missed by the entire Lotus community but we do hope to still keep seeing him at various Lotus events.

ESPNF1 just posted a list of 20 questions they asked new Lotus F1 driver Heikki Kovalainen. He shows us his Finnish nature in his answer to the following question Registration for the GGLC/BMWCCA joint EVO school on May 1 and 2 is now open. As someone who has taken the class before, I highly recommend them as one of the best ways to improve your skills and get better at autocrossing. The classes will be conducted in the Great America parking lot in Santa Clara and official class descriptions are below:

The “original” Evolution program as developed by the McKamey Autocross School. This first step in the Evolution is where all students start,regardless of experience. Daylong course builds upon students existing skills, while introducing new ideas to improve one’s times. Students both ride and drive with Evolution trained national caliber drivers to learn where they are fast and where they need to improve. Small student teacher ratio of 6:1 insures quality instruction time.

Combined with race proven skills, concepts, and techniques this course will improve the performance of all drivers on both road and track.Even experienced driver’s benefit from the Phase 1 course as a refresher for those things they’ve forgotten over the years or perhaps never learned.No matter what type of car you drive the Phase 1 skills will improve your overall driving abilities.

Note: All students must provide their own two-seat vehicle for the day. Two driver cars are welcome.

Building upon the skills learned in Phase 1, Phase 2 takes the driver into new areas of mental race preparation, allowing the Phase 1 skills to be applied as second nature. Various driving exercises are conducted throughout the day to improve the driver’s visual and mental imaging of the course, resulting in quicker lap times.

This course has worked “magic” in reinforcing the importance of Phase 1 skills and transferring those skills to every autocross course you may encounter. The Phase 2 track design is not the same as used in Phase 1 and generally has higher speed sections.Note: Phase 2 students must first have completed the Phase 1 Program. As in Phase 1, students must provide a two-seat vehicle for the day.

For more information in the Evo School program please visit their website at www.evoschool.com

Roger Becker, Lotus’ Director of Vehicle Engineering is retiring from Group Lotus after a long career of 44 years. 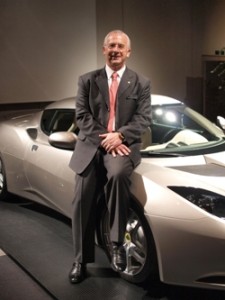 Roger, 64, joined Lotus in 1966, working on the Elan assembly line at Cheshunt, but his natural driving and engineering skills came to the attention of Lotus founder Colin Chapman and Roger was quickly moved to the vehicle development team where he worked directly with Mike Kimberley (former Lotus CEO) on the Lotus Europa Twin Cam – his first Lotus car development project.

During his career at Lotus, Roger has been responsible for the development of every Lotus car, including the legendary Esprit, Excel, Elan, Elise, Exige and the new critically acclaimed Lotus Evora. Roger has helped to maintain the philosophies laid down by Colin Chapman and has ensured that the essence and purity of Lotus is instilled in all new Lotus cars. He also has imparted his chassis engineering knowledge and development skills to many of the world’s major automotive manufacturers in support of Lotus’ consultancy engineering business.

On his retirement, Roger Becker said, “I have had a dream career at Lotus, with the honour of not only working directly for Colin Chapman but also working with some of the finest people in the motor industry. With the Lotus Evora successfully entering the market with unprecedented global adulation, and at 64 years of age, I feel now is the natural time to retire. The Evora has given me my finest hour at Lotus and I leave knowing it will be the foundation of all our next generation cars. The product engineering team will build on this to develop many more award-winning products and I wish them every success for what promises to be a very exciting future for Lotus cars and the Lotus brand.”

Dany Bahar, CEO of Group Lotus plc said, “On behalf of all the staff at Lotus, I would like to thank Roger for his contribution to Lotus over 44 years and we wish him well in his retirement.”