A celebratory end for Lotus F1® Team with a P2 finish for Kimi and the third consecutive points win for Romain in what was a nerve-shredding third round of the FIA 2013 World Championship Formula One® race in Shanghai, China.

The battle began early for Kimi as despite him having qualified second, a poor grid start meant he lost early race positioning. By lap 16, a track tussle with Sergio Pérez saw Kimi damage his nose cone culminating in a loss of downforce for the Finn. However, showing the spirit of a Chinese martial arts warrior, Kimi took on the opposition tenaciously, employing a well-thought out strategy that saw him conquer the challenges with tactical use of KERS (kinetic recovery system), DRS (drag reduction system) and tyre preservation. Needling his way through the grid traffic and deciding not to lose time by replacing the broken nose cone. Kimi’s assault in the black, gold and red steed saw him take the chequered flag in P2 much to the delight of the sea of Räikkönen fans all sporting their blue and white flags and black and gold Lotus banners.

Kimi Räikkönen, P2, E21-03 “Second wasn’t quite what we wanted, but in the circumstances it was the best that we could manage. I’m not 100% happy because we didn’t win, but it is what it is and second place is a good result after a bad start and the incident with Sergio [Perez]. It was quite difficult out there; obviously the car is not designed like that otherwise we would use it all the time, but I was surprised how good it was still. Of course there were some handling issues which was not ideal, but we just had to try to live with it and we still had pretty okay speed.”

Romain Grosjean, P9, E21-01 “I couldn’t get the performance I wanted. It was a long, tough race and again we were not able to make it work quite as well as we wanted. I’m definitely not happy with ninth place; we started P6 and thought we had a good chance to end up within the top five, but unfortunately we could not manage it. I did as much as I could, but I couldn’t get the performance I wanted and being in traffic of course affects this. It was good to score some points for the team, but I want more in Bahrain for sure.”

Eric Boullier, Team Principal “It’s a good result for the team. Kimi showed once more why he’s one of the very best drivers in the world by being one of the fastest on track despite sustaining damage to his car. As a team we were able to give him a good strategy allowing us to beat Lewis [Hamilton] and Mercedes in a close battle. Romain had a more difficult day, but he scored points in another race which is positive and we feel he’s reached a turning point now where things will start coming together. Without the poor start and without the incident for Kimi, we definitely would have fought for a win.

We now look forward to the forth round of the competition that takes place in Bahrain, next weekend, 22nd April 2013. 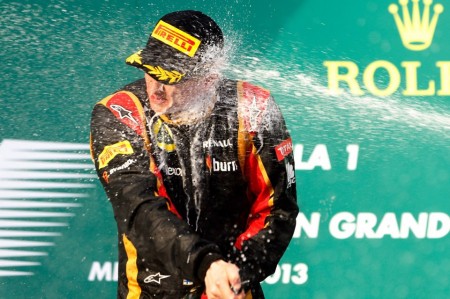