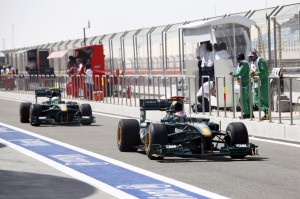 Friday at the Bahrain Grand Prix marked an historic day for Lotus Racing, exactly six months to the day since the team’s entry into the 2010 Formula One™ World Championship was confirmed. Jarno Trulli was first car on track as the pit lane lights turned green, followed closely by Heikki Kovalainen as the team saw their incredible efforts since September 12th 2009 come to fruition in the desert heat. 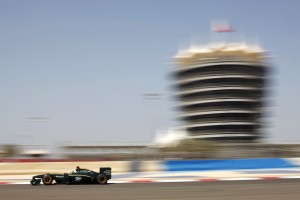 The morning session saw the team complete 36 laps in total, with both Heikki (21 laps) and Jarno (15 laps) completing their planned programs and stepping out of their respective cars satisfied with their morning’s work. As track temperatures climbed to nearly 50° after lunch they both returned to work, Jarno notching up another 14 laps and Heikki 23 more and testing aero upgrades that had been fitted over the lunch break. Heikki’s best time of the afternoon session was 2.00.873 and Jarno 2.00.990.

Chief Technical Officer Mike Gascoyne gave his thoughts on the team’s first outing of the race season, saying “A good day for the team after a very long night preparing the cars for today. Everyone worked very hard and it was satisfying to see us first out on track and then put in a solid performance throughout the day. We tried an aero upgrade this afternoon and we’ll look at the results of that in this afternoon’s debrief, but now we’re looking forward to putting in another professional performance tomorrow in qualifying.”

Thoughts now turn to tomorrow’s qualifying session and the forthcoming race, with Team Principal Tony Fernandes arriving in Bahrain to add his support to the Lotus Racing team’s efforts on track.