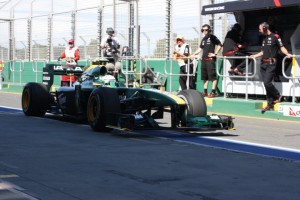 A sunny day in Melbourne welcomed Lotus Racing to their first practice session of round two of the 2010 Formula One™ season. Both drivers were keen to get going and test the cars on the semi-street track of Albert Park, and once again, a Lotus Cosworth was out first, Jarno Trulli being first car on track.

Heikki Kovalainen, 26 laps, best time 1.31.654: “First session was good – pretty much how we were planning to do it. We had a little problem with the differential but we managed to work around it. It meant that the car wasn’t quite performing 100% but it’s no big deal, and we were able to put some good laps in and check the car, the balance and the tyres and we’re pretty happy about it – all in all I feel very comfortable in the car.”

Jarno Trulli, 13 laps, best time 1.31.654: “We had a small issue but in the end we put in two good runs which meant we could check the balance and the tyres. It’s good to be back in Melbourne and running and I’m looking forward to having a better session this afternoon.”

The second practice session on Friday afternoon in Melbourne began under cloudy skies with light rain falling, curtailing track time for Lotus Racing throughout the afternoon session. Despite this the team ran a solid session and finished ahead of both other new teams having completed a total of 32 laps in second practice, with Jarno Trulli finishing the session 20th (17 laps / 30 laps total) with a best time of 1.30.695 and Heikki Kovalainen 18th on 1.29.860 (15 laps / 41 laps total).

Jarno Trulli: “It’s been a bit of a difficult day because we lost a bit of time this morning, and unfortunately this afternoon the track was pretty wet so we couldn’t really find a good set up. When I went out I had a few issues with understeer but, though it’ll be a little difficult tomorrow, we’ll see what we can learn in final practice before qualifying starts.”

Heikki Kovalainen: “The second session was much better for me, because the car functioned very well and we had the differential working 100%. The car felt really really good and we were very pleased with the way it was behaving. Obviously the rain disrupted things a little bit, but everyone was in the same boat. So, we’re well prepared, and we’re just going to try to maintain the reliability that we’ve achieved so far. Overall we’re in really good shape.”

Mike Gascoyne, Lotus Racing Chief Technical Officer: “Obviously the second session was affected by rain, which made it difficult, but we were able to run both types of tyre and get a feeling for how they both behave. Overall not a bad day – we got through most of our program, despite the conditions in the second session, so I’m pretty pleased.