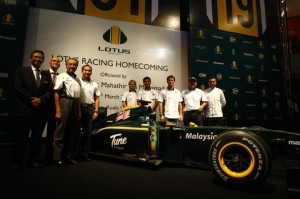 Lotus Racing is looking forward to another solid performance at the Petronas Malaysian GP in Sepang this weekend said its Deputy Team Principal SM Nasarudin. After Heikki Kovalainen finished the Melbourne Grand Prix in 13th place, the team is confident it can build on its strong start to the season at the third round of the 2010 Formula One™ World Championship, Lotus Racing’s first race at home in Malaysia. “We expect the race in Sepang this weekend to be another exciting outing for Lotus Racing. Heikki’s finish, just three places away from earning our first point in Melbourne, gives us a good boost for the coming race in Sepang,” SM Nasarudin said.

SM Nasarudin said: “This is truly the proudest moment for all of us to be here right in the heart of our capital city Kuala Lumpur, sharing this moment with all Malaysians and together we make it a 1Malaysia celebration. This is the much awaited homecoming for Lotus Racing, as this is the first time that the Lotus Cosworth T127 cars are on Malaysian soil. There is nothing like being on your own home ground.”

The Lotus Cosworth T127 is on display at the Pavilion’s main concourse area from 3pm to 10 pm today and it will be the first opportunity for F1™ fans in Malaysia to catch a glimpse of the machine since it was launched in London on 12 February.

“This is the real Lotus Cosworth T127 that will be racing in Sepang on 2-4 April. This is a very rare opportunity for our fans to see our actual car up close” added SM Nasimuddin.

Apart from an autograph session with drivers Jarno Trulli, Heikki Kovalainen and Fairuz Fauzy, Lotus Racing merchandise is also on sale for the first time during the event. The team also launched the Malaysian Chapter of the official Lotus Racing Fan Club.

On the side of the celebration is a photo gallery containing some rarely seen photographs that provide a chronology of the team’s history, development and progress.

The Lotus Racing team was announced by Prime Minister Dato’ Sri Najib Tun Razak in September 2009. Currently based in Norfolk, UK, the team launched its lean, green racing machine in London on 12 February 2010, exactly month before its maiden race in Bahrain and five months to the day after they received confirmation of their entry into the 2010 Formula One™ World Championship.

A private investment by Malaysia’s leading entrepreneurs, Lotus Racing’s current partners and sponsors include Proton Holdings, which licences out the use of the Lotus brand name to the team, Tune Group of Companies, of which Team Principal Dato’ Sri Tony Fernandes and Deputy Team Principal Dato’ Kamarudin Meranun are co-founders, Naza Group of Companies of which SM Nasarudin is Group CEO, Bridgestone, Hackett and CNN.

At the event today the team also announced its latest sponsor, Maxis Berhad. Sandip Das, Maxis Berhad Chief Executive Officer said, “Maxis is pleased to broaden its sports involvement through the sponsorship of the Lotus Racing Team in Formula One™. This is the pride of the nation and as the leading and most innovative Malaysian Telco, which is also globally respected, we wanted to be a part of this wonderful Malaysia moment. Maxis’ commitment to Lotus Racing promises to deliver a more integrated F1™ experience to our customers with immediate access to the latest racing news and information via their mobile phones, wherever and whenever they want. In addition, lucky Maxis customers will have the exclusive opportunity of watching the Sepang Grand Prix live this coming weekend compliments of Maxis.”