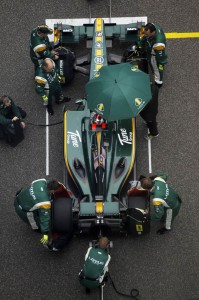 Lotus Racing’s first four races came to an end in China with another solid performance as the head of the new teams and for the first time coming out in front of one of their established rivals. Heikki Kovalainen dealt with the tricky conditions superbly, making a bold call early on to stay out on dry tyres when most of the pack opted for wets, and finished the race in 14th place after a tight battle with Nico Hulkenberg’s Williams. Jarno Trulli’s race came to a premature end on lap 34 after his run of bad luck continued in Shanghai in a race dominated by the damp conditions. 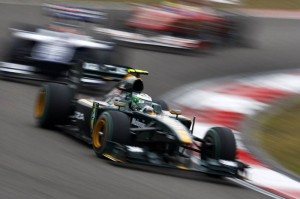 Heikki Kovalainen (T127-01, car no. 19, fastest lap 1.47.141): “This was a great way to round off our first four races. I think we had the correct strategy today in what were pretty tricky conditions. The pace was good – we were again ahead of the other new teams, and this time had a good battle with Williams. The decision to stay out early on dry tyres was made by me and the team together – it wasn’t wet enough to come in and as soon as the race started I could see the rain had calmed down so we agreed it was the right call to stick with the plan. The other cars on wet tyres were obviously struggling so that worked out very well. It might not always work out like this for us, but today it showed we’re a good team who make the right decisions, so I’m really pleased, for everyone in Lotus Racing, and all our fans. 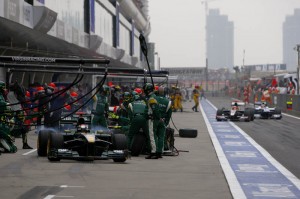 Jarno Trulli (T127-03, car no.19, fastest lap 1.49.675): “It was a tough day out there from the start, which is a shame because we’d had a trouble free weekend and I was able to push for quite a few laps. The conditions weren’t too bad and I was enjoying myself , but I had more hydraulics issues which brought me in on lap 18. The team did a good job to get me back out again but unfortunately the problems struck again and I had to retire. We’ve got a bit of time now before Spain to work on the new upgrades, so let’s see what happens when we reach Barcelona.” 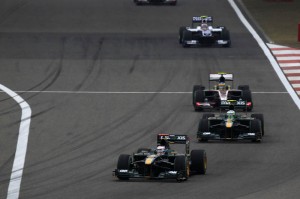 Mike Gascoyne, Chief Technical Officer: “Whilst I’m obviously pleased I want to say first how disappointed I am for Jarno. He’s had a lot of bad luck so far – it seems all our bad luck has been on his car, so apologies to him, but it was a fantastic race from Heikki. We judged all the calls correctly and were on the right tyres all the way through, so congratulations to the whole team for that. I’m also very pleased to see our race pace was very good, especially at the end on the wet conditions. These first four races were always going to be tough, but we’ve achieved what we set out to and now we’re looking ahead to Barcelona and seeing how the updates we’ve been working on help us move forward.” 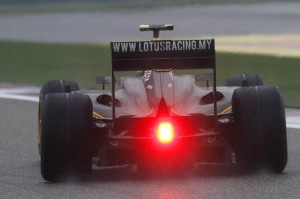 Tony Fernandes, Team Principal: “I’m really happy today as we’ve accomplished what we said we’d do. We wanted to see at least one car cross the line for the first four races, and we’ve done that, but it’s kind of bitter sweet today. It’s obviously a great result for Heikki but a real shame for Jarno as he seems to take the brunt of the issues – it’s a bit odd as it does seem to be just his car. The conditions today made it very tense out there and it’s very satisfying, and shows how we’re progressing, that today we were racing Williams, who we beat on track.”

“Another great thing for me was to see how the Lotus Racing dream is spreading, in China, Asia and across the world. We saw a load of Lotus Racing flags in the stands, and this time next year let’s hope we see even more fans out there cheering for us – we’ll do our best to give them something to be very proud of!”