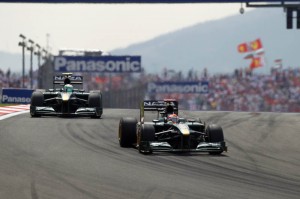 Lotus Racing were having one of their best days of the season at the Turkish Grand Prix until a double hydraulics failure brought both Jarno and Heikki’s races to an end on laps 32 and 33 respectively, Jarno coming to a halt on track and Heikki retiring in the pit.

Jarno Trulli (Lotus Cosworth T127-03) Started 19th, DNF: “It was difficult at the beginning with the hard tyres, and the team were telling me Heikki was quicker on the options, and as he was on a different strategy he got past. Afterwards, I was pulling away from our competitors comfortably, but the failure put an end to the good race I was having. “

Heikki Kovalainen (Lotus Cosworth T127-01) Started 20th, DNF: “What a shame. I lost power steering in turn eight and it looks like it was a hydraulics failure. At first I thought I had a puncture as the steering suddenly felt really strange, but then I lost the gearbox, the clutch, and throttle. It’s so unfortunate as this was our strongest race so far. I was on the softer tyre and although I wasn’t sure how they would run at the beginning of the race, they did in fact hang on really well. I can’t help but feel disappointed, but as I’ve said before these things happen, and we will work through this, and come out stronger as a result.

“We’re only a few tenths off the other teams per kilometre, and we know the areas to work on to improve this car. I’m confident we can make a very big step for next year and for now, we’ll move on and put this behind us.”

Mike Gascoyne, Chief Technical Officer: “Obviously very disappointing to have two cars go out on the same lap when we were having such a strong race, our strongest performance all year. We started the cars with Jarno on the harder tyre, and Heikki on the soft – Heikki was slightly quicker on the option to start with, but towards the end of the stint Jarno was catching him. We were hanging on for the pitstops, monitoring the rain situation, but then had sudden hydraulic failures on both cars. Heikki’s was a leak from the power steering, and with Jarno we don’t know as yet what the specific issue was. Despite that we have to keep our chins up after what was a really strong weekend from the whole team, fix these problems and move on. ”

Tony Fernandes, Team Principal: “This looked like it was going to be a great weekend for us so it’s obviously very disappointing to have it all brought to an end in such a fashion, after what was probably our best race so far. Jarno and Heikki should be very proud of the times they put in, and the whole team should be pleased with how far we’ve come. This is a low but to be champions we have to deal with the lows, learn from them and move on. It all reminds me of the early days of AirAsia, but we have just been awarded the title of world’s best low cost airline for the second year running, so I know we can repeat that with this team, and one day be victorious. Onwards and upwards, and now we’ll focus on Montreal.”