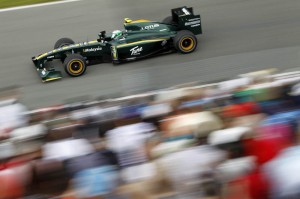 Back in Canada for Lotus Racing’s debut at Montreal’s Circuit Gilles Villeneuve and Friday’s practice sessions saw Lotus Racing comfortably ahead of their new team rivals, and edging ever closer to the midfield. Heikki Kovalainen completed his entire program and finished FP2 less than seven tenths behind Alguersuari’s Toro Rosso, but Jarno Trulli suffered an electrical problem that curtailed his running in both sessions.

Heikki Kovalainen (Lotus Cosworth T127-01 / FP1: 24 laps, 19th, 1.21.869 / FP2: 35 laps, 19th, 1.19.969): “Both sessions were pretty good today. The circuit obviously has not been used for a little while and it was quite dirty to start with, and even at the end of the second session the grip level was still quite low, but it’s definitely improving though! It felt a bit like a Rally Finland stage first thing this morning, so it could only get better from there!

“I think the team did a really good job today, improving the balance and keeping us going in the right direction all the time. The low downforce package seems to be working really well, which is very encouraging, and again, we’re not far away from the Toro Rossos. Maybe tomorrow in qualifying, I’ll be able to have a go at challenging them, and see what happens. We’re going to focus on keeping the rear of the car under control, and I think we are getting there with that, so, from my side of the garage, things are working out really well.” 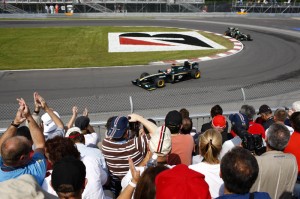 Jarno Trulli (Lotus Cosworth T127-03 / FP1: 12 laps, 21st, 1.22.543 / FP2: 11 laps, 22nd,1.21.346): “It’s been a difficult day but I’ll move on from this and I still feel positive – after all, this is still our first season, and we’re only eight races in. I had a few laps, but not enough to get a setup I felt comfortable with. I could feel that both the hard and the soft tyres suffered bad degradation, but after today I want to thank the team for working very hard to fix the problems on my car, and we’ll see if the luck will change tomorrow.”

Mike Gascoyne, Chief Technical Officer: “It was difficult today – a couple of reliability problems curtailed Jarno’s running, but with Heikki we completed everything we wanted to, so that’s a plus. The tyre performance is always difficult on the first day here, but especially so today, so we’ll have to see how that develops tomorrow – it could be interesting. Overall, Heikki’s performance was good, but apologies to Jarno for the issues – despite those, I’m sure we can get both cars up where we want them tomorrow.” 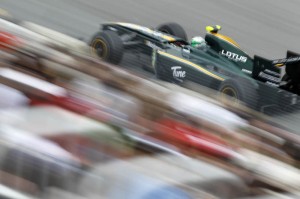 Tony Fernandes, Team Principal: “It was obviously a bit of a tough session out there, a dirty track and a couple of issues for Jarno, but we still showed we keep picking up speed, finishing FP2 just over three seconds off the outright pace. Both Jarno and Heikki are upbeat, and the main aim now is to bring both cars home on Sunday – if we do that I’ll be very happy.”