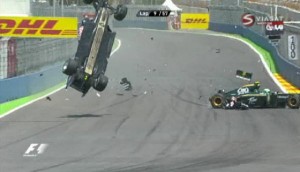 After a very promising build up to the European Grand Prix, Lotus Racing leave Valencia relieved that Heikki Kovalainen and Red Bull’s Mark Webber both came out of a potentially very dangerous crash on lap 10 unscathed, and encouraged by Jarno Trulli’s race pace after a very unfortunate start to his afternoon’s work saw him make an early stop for a new front wing, before going on to finish 21st.

Jarno Trulli (Chassis T127-04) Qualified 19th, finished 21st “I don’t know exactly what happened at the beginning as I managed to get away from the mess at the front but I was hit from the back and at the same time lost my front wing. It all happened during the first lap, so I thought it was the end of the race for me, but I managed to get back to the pits, and the mechanics did a great job to fix the car. I went out but had a gearbox problem, so more good work from the boys got me back out and I was then able to run to the end. I did the whole race with one set of tyres, and I felt that the pace throughout was very good. The handling was great, so I’m happy about the performance and when I pushed I was able to put in some really good lap times.”

Heikki Kovalainen (Chassis T127-01) Qualified 20th, DNF “First of all it’s good news that both of us are ok. Mark had a hardcore flight, and it could have ended up much worse, so it’s good we’re both fine. It’s such a shame the race ended that early – I was going really well, pulling away from the guys behind by about half a second a lap, and with Mark we were racing for position so I was always going to defend. I didn’t do anything wrong and he just ran into me. I think he missed his braking point and he ran into me at a very bad angle – his front tyre hit my right rear and he took off. I had to make a mandatory visit to the medical centre, and shook hands with Mark there, but I’m absolutely fine, and glad Mark is too.”

Mike Gascoyne, Chief Technical Officer: “Obviously it was a very disappointing end to our 500th race. Jarno got hit at the start, and we had to change the nose. He also took a hit at the back, and that caused a gearbox problem. We were able to fix that and send him out again, although he was three laps down. He was held up by some of the other slower cars, but at the end of the race he was able to push and really show the car’s pace.

“Heikki had an accident with Webber – he was defending his line and racing for position, and that’s what we will always do in that situation. It’s just a great shame, and we’re very glad that neither driver was hurt.”

Tony Fernandes, Team Principal: “Heikki’s accident is part of racing. It’s a shame as both cars are coming on really well, but there is some good to take out of this. Despite being hit, Jarno managed to finish the race, and at the end it was great to hear him say ‘the car is bloody good!’

“Overall it’s been a very positive weekend, with a good Qualifying session and lots of very positive meetings and good decisions made for next year. It’s also been a pleasure having the Chapman family here, and now we’re all looking forward to bringing Lotus Racing back to the UK and racing in front of the British fans.”