On 20th June 2010 at the Classic Team Lotus Festival at Snetterton, thanks to the generous participation of owners from all over the world, one of every type of Team Lotus Formula One car was gathered together for the first time. 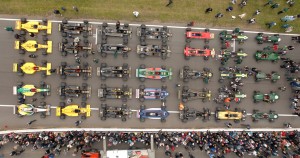 They lined are up in type number order as follows:

This special occasion was captured by daredevil photographer, William Taylor, from 34 metres up on a hydraulic platform, positioned directly above the centre of the grid. Classic Team Lotus is producing 491 numbered prints of this unique image for sale (photo print quality, image dimensions 750 x 375, print dimensions 800 x 500).

79 will be signed by Hazel Chapman and Clive Chapman, and numbered in accordance with the Grand Prix victories, and priced at £200.

412 will be signed by Clive Chapman and Chris Dinnage, the Classic Team Lotus Team Manager, and priced at £100.

Dispatch is to commence by the end of July. The prints will be unframed and despatched in a large diameter, bespoke tube.

If you would like to order one of these prints of this special moment in Team Lotus history, please email Dave Massey at dave@classicteamlotus.co.uk.