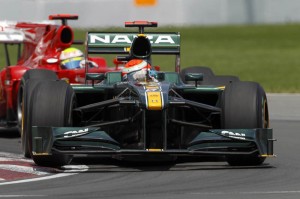 The Canadian Grand Prix made good on its promise of providing the best race of the season so far, and Lotus Racing put in a great day’s work to see Heikki Kovalainen finish the race 16th, ahead of Petrov’s Renault, after a great battle on track in what proved to be punishing conditions for the tyres for the whole field. Jarno Trulli, who had been showing quick pace right from the start, pulled over on lap 42 after a vibration at the front end led to a problem with the braking system that put paid to his race.

Heikki Kovalainen (Lotus Cosworth T127-01) 16th, best lap 1.20.654 “It’s been a great weekend, and I’m really pleased for the whole team with the result today. We finished ahead of Petrov and lapped the other new guys, and although it was hard work managing the tyres, it’s still great to show what we can do. The race itself was tough, but it’s all about the result – I didn’t have any technical problems with the car, but the rear wasn’t working quite as I’d have liked, and I think that was down to the tyre wear.”

Jarno Trulli (Lotus Cosworth T127-03) DNF best lap 1.20.791 “It’s such a shame I had to pull over – I had a great start and then I was really flying during the race. We got the strategy right on the tyres, and my pace was good – I was keeping up with the boys in front, and I was overtaking our other rivals. But then I felt a vibration that caused a problem with the braking system and I had to pull over. Still – we have to move on. It’s another learning curve for the team and I think it’s great to see that in the race I could really push and was putting in some very good lap times.” 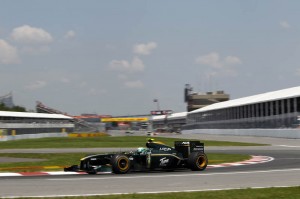 Mike Gascoyne, Chief Technical Officer: “I think overall we can be very happy with the race, and the whole weekend. The one disappointment was obviously Jarno’s problem – we will have to look at it in more detail, but it looks as though the vibration put paid to his race. Before he pulled over he was absolutely flying and the strategy would have really paid out for him, so that’s a plus. Heikki drove a fantastic race, fighting all the way with the guys in front, and kept it up right to the end to keep Petrov behind him.

“I think this weekend has been a massive step forward for the whole team. Rather than being just one of the new teams, we actually got stuck in and raced the teams ahead, which is what we wanted to do, so congratulations and thank you to the whole team for getting us to this position. In the end we lapped both of the other new teams, so it was a great effort, and again, well done!”

Tony Fernandes, Team Principal: “I’m very happy with the result today, and the whole weekend’s work. We got 42 laps from Jarno and Heikki drove an absolute cracker – beating a Renault was great, and Heikki did really well to hold him off, but the main aim for us is to get both cars home, and we’ll keep working on that back at the factory and at the track. Now we go to Valencia where we’ll be celebrating the 500th F1™ race Lotus has competed in, and the ninth for Lotus Racing.”